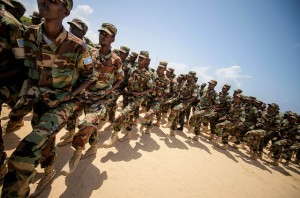 The Government of Tanzania is set to train 1,000 soldiers from the Somali National Army in a bid to boost the capacity of the local forces to consolidate security in the war-torn nation.

A report by Sabahi quotes the director of communications for the president of Tanzania, Salva Rweyemamu, explaining that the aim of the program is to improve the professionalism of the Somali army “so that they maintain their country’s security to allow citizens to engage in development matters.”

According to him, the training camps have already been prepared and Tanzania People’s Defence Force (TPDF) are waiting for Somali officials to select the soldiers for the program.

The selection of soldiers for training programs has been a source of contention among Somali officials in the past.

In 2007, after President Jakaya Kikwete committed to training Somali soldiers, an amplified dispute over which soldiers will attend the program caused a one-year delay in the deployment of the force and allegedly contributed to the dismissal of former Prime Minister Ali Mohamed Gedo.

Local sources say the altercations over which soldiers will be sent on training programs is rooted in concerns that some officials are attempting to illegally forward their tribesmen. This, critics say, would quickly foster division in the army and give these officials some sort of ‘warlord’ status.

Meanwhile, back in Tanzania, there has been a debate among legislators over the prospects of deploying the TPDF to Somalia.

While Tanzania has been involved in regional peace-keeping operations and has organized training programs for soldiers from east and southern African countries; the government has failed to deploy any troops to Somalia.

Many lawmakers who oppose any plans to dispatch Tanzanian forces to Somalia say such a move would put the country at risk of being target to reprisal attacks from al Shabab.

The al Qaeda-linked terrorists have orchestrated a deadly wave of attacks on many countries in the region and have vowed to continue striking all countries contributing soldiers to the African Union Mission in Somalia (AMISOM).

Job Ndugai, the deputy speaker of Tanzania’s National Assembly, who has also protested against any plans of sending Tanzanian soldiers to Somalia, noted that ” If anything, we should facilitate conferences for conflicting parties to resolve their differences.”

According to him, the country currently has over 2,200 soldiers on peacekeeping missions in Lebanon, Sudan, South Sudan and the Democratic Republic of Congo.

In the past, the Somali National Army has received training from many other countries including the United States, Ethiopia, Kenya, Uganda and the European Union.

Clans clash in southern and central Somalia
More than 40 people have been reported dead in fighting between feuding clans in Somalia this month.

In Lower Shabelle region last week, clashes between militants from rival clans soon sucked in the military, according to local sources.

Reports indicate that the commotion forced many businesses to close down and drove hundreds of local residents to seek shelter in AMISOM bases.

This week, about 12 people have been reported dead in clashes between clans in the Galgaduud region. Many other people were allegedly injured from the violence.

Local sources say a delegation of top officials, led by the Minister of Interior and Federal Affairs, Abdullahi Godax Barre, have been dispatched to Lower Shabelle to facilitate reconciliation between the fighting clans.

Despite losing ground to the Somali army and AMISOM forces, al Shabab continues to pose a deadly threat in the region.

However, some pundits say a recent wave of mass defections from the religious extremist group could prove to be the proverbial chink in its armour.

Earlier in the week, al Shabab’s commander for the Sanaag region, Mohamed Saeed Atam, defected from the terrorists after he condemned the ‘impudent, brutal and dangerous’ tactics of its leader Ahmed Godane.

He noted that the wanton murder of peaceful people is not consistent with the teachings of the Qu’ran.

The veteran fighter also urged young militants in the group to muster enough courage to also defect; noting that this does not in any way compromise their belief in Islam.

Meanwhile, IRIN News has reported that the Somali government continues to face difficulties in re-integrating ex-combatants back into the society.

Many of the fighters are reportedly forced to join the terrorists to meet their needs, and once out of the group they stand to face the brunt of the economic uncertainty that broods over a large percentage of the country. The ex-fighters are reportedly also at risk of being the target of punitive attacks from the group; who are naturally averse to such decisions. Critics say the prolonged screening period of former combatant further exacerbates their uncertainty.

In 2013, Somali authorities launched a National Programme for the Treatment and handling of Disengaging Combatants and Youth at Risk in Somalia. Reports indicate that four transitional facilities for ex-fighters are currently being developed in Mogadishu, Kismayo, Baidoa and Belet Weyne.

Some observers, however, say the key to resolving this conflict is to effectively manage feuds between local clans before they get blown out of proportion. However, they say the government still has to battle extremist elements of the group; who take advantage of these clan disputes.