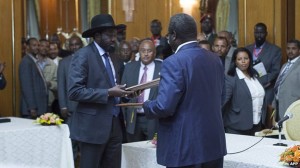 President Salva Kiir and rebel leader Riek Machar on Tuesday reached an agreement to finalize their discussion on a transitional government in the coming months.

The two men, who met on the sidelines of the 26th extraordinary meeting of the Heads of States of Intergovernmental Authority for Development (IGAD) member countries in Addis Ababa, also reaffirmed their commitment to their ceasefire agreements in January and May and vowed to continue to provide open access for humanitarian aid to displaced people.

They further agreed to include other stakeholders in the talks and set a timeline for the withdrawal of Uganda People’s Defence Force (UPDF).

The current IGAD chairman and Ethiopian Prime Minister, Hailemariam Desalegn, who disclosed this news to the press, noted that the regional authority would revert to other measures (such as sanctions and other punitive actions) should both parties continue to violate their accords.

The United States has already imposed sanctions on individuals from both sides of the conflict due to the flagrant violations of their ceasefire deals.

Nonetheless, reports indicate that isolated fighting has continued in Upper Nile and Unity State this week.

On Tuesday, African leaders directed an open letter to President Kiir and Mr. Machar in which they condemned the continued violence; noting that it was antithetical to the country’s long struggle for independence from the Sudan.

They went on to urge both men to ‘follow in the footsteps of great African leaders’ and opt to end all hostilities.

More than one million people have been displaced and thousands murdered since violence broke out in the country in mid-December last year.

Humanitarian agencies have warned of an impending food crisis if violence prevents farmers from keeping to their traditional planting calendar.

Meanwhile, the United Nations Children’s Fund (UNICEF) has revealed that up to 9,000 children may have been recruited by both sides to participate in the ongoing war.

However, both sides have denied using under-age fighters.

UNICEF has also charged both sides of other heinous war crimes including mutilation, sexual violence and abduction.