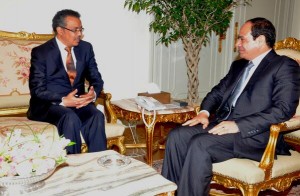 Ethiopia’s Foreign Minister, Tedros Adhanom, has revealed that an agreement has been reached with the Egyptian government to re-open tripartite talks – with Sudan – concerning the renaissance dam.

He made this comment at the end of a three-day visit to Cairo on Tuesday. According to Mr. Adhanom, the technical deliberations will be complimented with high-level consultations.

Since the talks broke down earlier in the year, both nations have been caught in a tense diplomatic row that saw tirades directed at one another.

However, Mr. Adhanom has explained that both nations are working to create a new era of mutually beneficial ties.

“We have agreed on the importance of political commitment to make partnership and cooperation better,” he disclosed.

Mr. Adhanom has further welcomed President Abdel Fattah El-Sisi’s comments on the need to bury their dispute during his swearing-in ceremony on Sunday.

He noted that Egypt’s new leader also expressed willingness to collaborate with Ethiopia based on ‘trust and confidence.’

According to Mr. Adhanom, a meeting between the leaders of both nations at an African Union summit scheduled for Equatorial Guinea later this month will officially mark the beginning of a new era of diplomatic ties.

Ethiopian officials say the state has failed to capitalize on her abundant water resources, until recently.

Many commentators have also criticized Egypt’s insistence on the colonial-era Nile treaties, describing it as backwards.