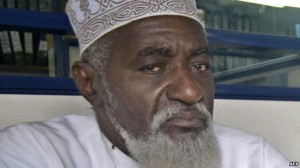 The chairman of the Council of Imam and Preachers of Kenya, Sheikh Mohammed Idris, has been shot and killed in Mombasa on Tuesday by unidentified gunmen.

Local sources say the vocal Muslim leader was attacked as he exited a mosque near his home in the coastal city.

Sheikh Idris had reportedly expressed concerns for his safety after receiving threats from radical youths.

The cleric, who dismissed Islamic extremism, reportedly urged the authorities to clamp down on attempts to radicalize young people in mosques.

Reports indicate that the sheikh had clashed with radical elements of the local mosque he leads in the city. Last year, Sheikh Idris was ejected from the Sakina Mosque by radical youths. In April, the group attempted to change the name of the mosque to Masjid Mujahedeen. However, the authorities intervened and reversed the move.

Mombasa Police Commander, Robert Kitur, has revealed that the sheikh’s attackers are likely to be part of the group who oppose his re-installation as leader of the mosque.

The head of the Criminal Investigation Division of Mombasa, Henry Ondieki, has revealed that the attackers may be acquaintances of the sheikh.

According to him, “it seems the attackers trailed him [Sheikh Idris] before striking.”

Meanwhile, President Uhuru Kenyatta has described the assassination of the sheikh as a ‘big blow’ to the fight against extremism and has vowed to ensure justice prevails.

The United States and United Kingdom have also condemned the killing of the sheikh and have urged Kenyan authorities to bring the perpetrators to book.

Several renowned Muslim clerics have been assassinated in cold blood in Mombasa since 2012. About two months ago, controversial cleric Abubakar Shariff Ahmed, (also known as Makaburi), was gunned down in the city. The local Muslim community have accused the police of complicity in some of these killings.