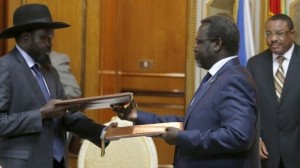 President Salva Kiir and Riek Machar will meet in Addis Ababa on Monday to discuss the way forward for young, war-torn South Sudan.

Rebel spokesman, Yohanis Musa, told the press in Khartoum last week that both sides will begin to map out plans for the future; including the formation of an interim government.

“We are sticking to our proposal for a one-year period for the transitional government followed by a General Election, besides the importance of implementing the federal system to solve the crisis of governance and the distribution of wealth and power in South Sudan,” he said.

Reports indicate that the Intergovernmental Authority for Development (IGAD) has completed a multi-stakeholder symposium in Addis Ababa this weekend aimed at promoting peace and reconciliation in South Sudan.

Heads of States from the regional trading bloc are expected to also meet in the capital of Ethiopia this week to discuss the next phase of the peace process in the country.

Local sources say government and rebel forces clashed in at least one state this weekend.

Thousands of people have been killed and more than one million displaced from their homes since violence broke out in the country last year. The United Nations and other observers have accused both sides of various atrocities; including ethnic-based massacres, looting and the destruction of properties.

According to the director of HRW for Africa, Daniel Bekele, the confidence of the perpetrators to carry out these “devastating” atrocities stems from the country’s history of exonerating war crime offenders.

“The mediators need to break with the past by ensuring that amnesty for serious crimes is not on the table,” he said.