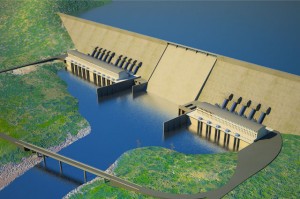 President Abdel-Fattah El-Sisi has vowed not permit the protracted diplomatic row with neighbouring Ethiopia evolve into a serious crisis.

He made this comment during his inaugural address at the Qubba Palace on Sunday, adding that Egypt recognizes the value of Pan-Africanism.

“If the Grand Renaissance Dam is Ethiopia’s right for development, the Nile is Egypt’s right to live,” he said.

The 6,000 MW Grand Ethiopian Renaissance Dam (GERD) has been a point of contention between both nations since 2011.

While Ethiopian authorities continue to downplay the concerns of the Egyptian government, both sides have failed to formally resolve their dispute.

Tripartite talks between the water resources ministers of Ethiopia, Egypt and Sudan came to a halt abruptly earlier in the year due to the failure of the delegates to traverse their disagreements. However, this past month, officials from Ethiopia and Egypt have voiced their eagerness to return to the negotiation table. The delegates are expected to draw a plan for the implementation of the recommendations of a panel of experts on the dam and also address Egypt’s calls for new studies into the 63 billion cubic meters reservoir facility.

Reports indicate that the GERD is already over 30% complete and is on track to be officially commissioned by 2017. However, it is expected to start generating power by next year.

Meanwhile, commentators say Ethiopia seems to be winning the support of other Nile tributary countries. Officials from Rwanda, Uganda and South Sudan recently refuted demands for a review of the 2010 Entebbe agreement to support Egypt’s claims to a larger percentage of the Nile’s water.

This agreement has been at the centre of the brooding dispute. The Egyptian government has failed to recognize it in favour of two colonial era agreements between Nile tributary nations. But the other nations claim those agreements unfairly gave Egypt and Sudan rights to the lion-share of the fabled water.

Several pundits have suggested that the Egyptian government invests into developing alternative sources of freshwater for the arid nation.