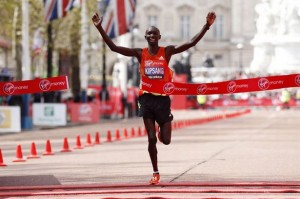 The current marathon world record holder, Wilson Kipsang, added another medal to his collection on Sunday after winning the men’s London Marathon in record time of 2:04:29 – about 11 seconds better than the previous record.

The 32-year old, who won the same title two years ago, recently told the press that he thought completing a long-distance marathon in under two hours is possible, but, perhaps not in his time.

Another Kenyan, Stanley Biwott, claimed the second spot after finishing about 26 seconds behind Kipsang.

Mo Farah finished his much anticipated long distance marathon debut in 8th place, with a time of 2:08:19.

The Somali-born athlete expressed his disappointment to the media saying ” I gave it a go, but that’s all I could do. I’m disappointed I couldn’t give the crowd what they deserved.”

However, the Olympic Games, World Championships and European Championships track-race gold medal holder has revealed that he will give long distance marathon another try.

In the women’s race, Kenya’s Edna Kiplagat (02:20:21) outpaced her fellow compatriot Florence Kiplagat to claim her first London Marathon title after finishing as runner-up for the past two years.