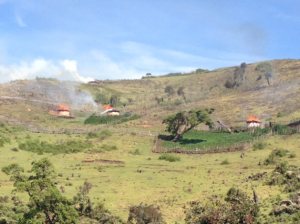 Kenyan Forest Service officials have kept up their forceful eviction of residents of the Embobut forest and the entire Cherangany hills, despite a court order and widespread protests against the controversial move.

According to local sources, over 1,000 homes have been burnt this year alone as forest service officials make way for a Natural Resource Management Project, which is reportedly aimed at protecting the hills – one of Kenya’s most important water sources – from degradation due to overpopulation and increased logging.

Last week, Cabinet Secretary for the Environment, Judi Wokhungu, revealed that officials have secured enough land from the settlers for the forest rehabilitation program to commence.

He also revealed that the government has built a fence and deployed armed rangers to prevent the evicted settlers from trickling back in.

Although Kenyan officials have reportedly attempted to evict the Sengwer and other residents of the Cherangany Hills since the 70s, this recent attempt has been the most successful, according to analysts.

Many locals say since the World Bank reportedly provided $4.6 million to the Kenyan government for its forest rehabilitation program, the eviction exercise have gained momentum and have been carried out with increasing disregard for the law.

Although when the Cherangany Hills were declared a national asset in 1964, the settlers were stamped with an illegal status. Kenya’s 2010 Constitution recognizes communal rights to ancestral land.

Despite the fact that Cherangany residents have lodged their case with a local court and secured an injunction against the eviction exercise, the move continues to be effected with impunity.

Meanwhile, Kenyan officials say the displaced indigenous residents of the Embobut have been compensated and supported with an alternative livelihood scheme.

But many locals claim the compensation plan does not cover all the evicted residents of the forest.

In response to accusations that it is funding the Kenyan government’s eviction of Embobut residents, the World Bank has released a statement to clear its position.

“The World Bank is not involved in the reported evictions, nor has the Bank financed or supported these actions,” the statement reads.

It goes further to note that the bank is dedicated to improving the life of all Kenyans. To this end, the bank has reportedly vowed to support discussions between the government and residents of the Cherangany Hills.

United Nations Special Rapporteur, James Anaya, has also spoken against the forceful eviction of the Cherangany residents from their ancestral land.

The United Nations has further implored Kenyan authorities to consult with the evicted communities and compensate them dutifully.

Meanwhile, Kenyan officials have noted that the goal of the forest rehabilitation program is to increase the Cherangany Hills’ forest cover from 4% to 10%.

Photo by Justin Kenrick: Homes of Sengwer settlers on the Embobut forest being burnt in January 2014.