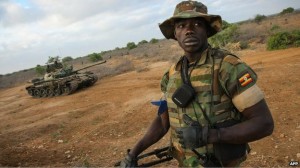 In response to demands for the withdrawal of the Ugandan People’s Defence Force (UPDF) from South Sudan in light of the standing ceasefire agreement between the warring factions, Ugandan authorities have revealed that the UPDF will remain in the devastated nation until its stability is guaranteed.

At least two top ranking Ugandan officials, Okello Oryem, Deputy Foreign Minister, and Rose Namayanja, Minister of Information and National Guidance, have told reporters that there are no immediate plans of pulling Ugandan forces out of South Sudan.

While Ugandan authorities continue to insist the UPDF’s role in South Sudan has been influential in protecting civilians and vital facilities in the world’s youngest nation, other parties say the UPDF’s role risks escalating the conflict in South Sudan and destroying the modicum gains of the Inter Governmental Authority for Development (IGAD).

Despite the ceasefire agreement signed just over a week ago in Addis Ababa, isolated fighting has been reported in at least three states in South Sudan.

Rebels and government forces continue to accuse one another of initiating the clashes.

The rebels further claim that Ugandan forces have actively supported the South Sudanese army in their attacks on rebel positions.

As reports surface of grave human rights violations during the six weeks of violence in South Sudan, questions over the role of the Ugandan military in South Sudan have reached a louder pitch.

Critics say given the fact that the UPDF has been leveled with war crimes accusations in the past, its role in the war in South Sudan is even more contentious.

Reports have emerged that the Inter Governmental Agency for Development (IGAD), who have been mediating talks between representatives of President Salva Kiir and his former deputy Riek Machar, will deploy observers to South Sudan to monitor if the ceasefire agreement is being adhered to.

According to popular estimates, over half a million people have been displaced from their homes and over ten thousand killed since violence broke out in South Sudan on December 15th, last year.

Photo by AFP: A Ugandan soldier in South Sudan.