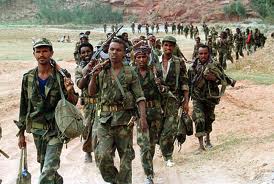 Reports from Baidoa suggests that additional Ethiopia troops have arrived at the provincial capital of the Bay Region.

Local residents and confidential sources in Baidoa confirmed to Radio Shabelle in Mogadishu that Ethiopian troops have been deployed to the town.

According to Radio Shabelle, reliable inside sources have revealed that the Ethiopia troops will take over the overall security of Bay, Bakol and Gedo.

Reports have emerged that Ethiopian troops will set up a new base in the town.

This news update comes just days after Ethiopian troops, who were one of the first peace-keeping forces to be deployed to Somalia, were officially integrated into the African Union’s Mission in Somalia.

In a related news, Somali President Hassan Sheikh Mohamud, welcomed the addition of Ethiopian forces to AMISOM, adding that the Somali military and African Union peacekeepers will soon launch incursive operations in areas still under the control of al Shabab.

“The Somali national army and the AMISOM forces will jointly be conducting these operations to eliminate Shabab and declare all the territory of Somalia out of the control of al-Shabab,” he said.

Exuding confidence in the operations against the terrorists, he also noted that “the al-Shabab threat will be reduced immensely soon, but it will remain for some time.”

The campaigns against al-Shabab by AMISOM and allied militaries since 2011 have also created some problems, according to observers. The rapid liberation of previously occupied cities has allegedly left behind power vacuums that the federal government continues to face difficulties filling.

President Hassan has vowed to quickly install local administrations in newly liberated areas. According to him, the problems of the past, including leadership disputes, arose because there was no plan in place.

In a report by the V.O.A, the U.N. Special Representative for Somalia, Nick Kay, has said on Wednesday that more needs to be done now to link political and military objectives.

“Certainly establishing the right local governance has taken a bit of time, but more importantly than that is the follow through of providing, helping the local government to provide better services – schools, education, whatever – that has been slow and we want to make sure this time it is more effective and quicker,” he said.