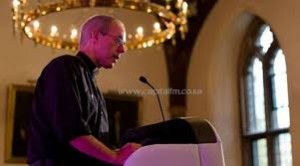 Justin Welby, the Archbishop of Canterbury and leader of Anglican churches worldwide has called on both factions of the divide in South Sudan to completely end the fighting in which thousands have been reportedly slaughtered.

The Archbishop, who arrived on Thursday as part of his four-nation African tour, has met with President Salva Kiir to plead his concerns.

“In a world where everyone is used to killing, I ask you to call on all your courage and faith, to remember your suffering, to remember those who have been killed, to be clear that those were terrible injustices, but to pray that you may love your enemies,” he relayed in a sermon in the nation’s capital Juba.

Thousands have been reportedly killed in fighting pitting forces loyal to President Salva Kiir against a coalition of army defectors and ethnic militia provisionally headed by the nation’s former vice president, Riek Machar, who is himself a seasoned guerrilla fighter.

“I’ve heard particularly bad news of attacks….what is important is that… the facts of this are established in a way that no one can deny, and that we understand fully, and lessons are learned,” Welby said.”There must be no impunity.”

Despite a ceasefire agreement in South Sudan, isolated clashes have continued to rage in at least three states.states.