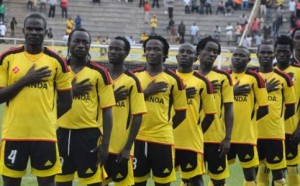 The Cranes of Uganda have been knocked out of the ongoing African Nations Championship in South Africa, after losing 3 – 1 to the Atlas Lions of Morocco in their final group game on Monday at the Cape Town Stadium, Cape Town.

The encounter, which many commentators say was equally played between both sides, proved especially nerve-wrecking for fans of the Cranes, who saw their team concede three goals despite an impressive display.

The Cranes attempted to exert pressure on the Atlas Lions in the early minutes of the encounter, but the tides turned around when Morocco’s Abdessamad Rafik net one for his team on the 29th minute.

The Atlas Lions’ swift counter attack strategy proved to be the winning strategy of the day, when the first half ended 1 – 0.

In the second half, the Cranes continued to press for an equalizer and were rewarded on the 60th minute with a goal by Yunus Sentamu.

But the Cranes’ celebrations were shut on the 77th minute when Iajour Mouhssine put the Atlas Lions ahead once again.

Despite several attempts to grab an equalizer, the scoreline remained in the favor of the Atlas Lions.

In extra time, Abdelkbir El Ouadi sealed the victory for the Atlas Lions with a nicely struck shot that sailed past the Ugandan goalie.

In the other Group B match, the Stallions of Burkina Faso lost 0 – 1 to the Warriors of Zimbabwe at the Athlone Stadium, Cape Town.

As it stands, Morocco and Zimbabwe will join Mali and Nigeria, who sealed their places in the quarterfinal stage of the competition with victories over Mozambique and South Africa respectively.

On Tuesday, the Walya Antelopes of Ethiopia will take to the field against the Blackstars of Ghana at the Free State stadium, Manguang.

While many commentators had expressed high hopes for the encounter, many say the Walyas may take to the field with less determination knowing they have already been eliminated from the competition.

In the other Group C match today, Congo will take on the Mediterranean Knights of Libya at the Peter Mokoba stadium, Polokwane.

Photo: The Cranes of Uganda.