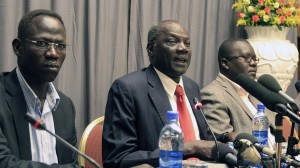 Officials representing both sides of the divide in South Sudan say a ceasefire deal has been agreed on to allow negotiations in Addis Ababa proceed.

Until now, the talk being mediated by the Inter-Governmental Agency for Development (IGAD) has virtually been at a standstill over the fate of 11 jailed ex-ministers – whom the government of South Sudan has refused to release.

According to Sudan Tribune, both sides acquiesced to the deal shortly after reports emerged that Bor, capital of Jonglei state, had been recaptured from the rebels.

This is the fourth time the largest city in the warring nation, Bor, has changed hands.

When the rebels lost Bentiu to government forces just over a week ago, several pundits had noted that the longer the rebels keep from the table, the more their bargaining power dwindled.

Although the spokesperson for President Kiir, Ateny Awek Ateny told reporters he expected the agreement to be signed by today, it is still unclear if both sides have actually put pen to paper on this deal, which was verbally agreed late on Saturday.

The rebels have allegedly consented to temporarily stop fighting because the new ceasefire deal addresses their concerns satisfactorily.

Yien Mathew Chol, deputy spokesperson for the rebels, who confirmed to the media that they had accepted to temporarily halt hostilities, disclosed that the new draft deal includes the release of the 11 ex-ministers in custody, the cessation of media propaganda campaigns from both sides as well as the withdrawal of foreign troops from the country. The deal also stipulates that both sides will allow humanitarian aid to be delivered to victims displaced by the fighting.

There were still some contention, however, about the wording of the agreement, according to some reports.

After Bor was reclaimed last week – essentially uprooting fears of an impending attack on Juba – news emerged that fighting continued to rage in parts of Malakal.

Spokesperson for the South Sudanese Army, Philip Aguer, on Saturday confirmed that indeed fighting had been ongoing in parts of Malakal. He however failed to disclose more information as communication difficulties had reportedly prevented the army from contacting commanders on the ground.

Although the victory for government forces in Bor over the weekend is supposed to represent a major step on the road to peace in South Sudan, authorities have been subjected to a barrage of criticisms over the role of the Ugandan military in the battle.

Several reports have emerged that Ugandan troops actively participated in the offensive against the rebels on Saturday.

In the wake of the clash, there are reports of Bor being virtually empty with dead bodies laying across the streets and numerous shops vandalized.

The United Nations has noted that South Sudan is in the middle of a dire humanitarian crisis with over 400,000 civilians displaced. About 10,000 people are also believed to have been killed in the fighting thus far.

Photo by AFP/Solan Gimechu: South Sudan Minister for Information and Broadcast, Michael Makuei  gives a press conference on January 5, 2014 alongside other delegation members in Addis Ababa.