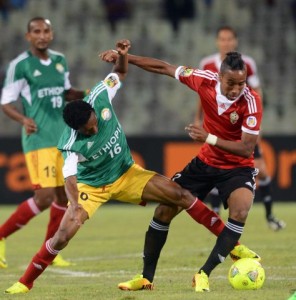 The Walya Antelopes of Ethiopia on Monday lost their opening match at the ongoing 2014 Orange African Nations Championship in South Africa to the Mediterranean Knights of Libya in a rather one-sided encounter.

The Walyas made a terrible mistake after conceding a goal in the 4th minute to Libya’s Elmutasem Abushnaf.

Although the Walyas attempted to gather momentum several times during the drab encounter, the Knights somehow hung on to their lead.

A goal in the 83rd minute from Abdulsalam Faraj Omar served to seal the victory for the Knights, who weren’t considered top favorites at the start of the competition.

In the other Group C match played at the Free State stadium today, the Blackstars of Ghana recorded a 1- 0 victory over Congo in a closely contested encounter.

A deflected strike from Theophilous Anobaah produced the only goal of the game in the 35th minute.

Despite the presence of ex-Ghanaian coach Claude Leroy at their corner, the Congolese team failed to steal the game from the characteristically committed Blackstars.

On Sunday, the Cranes of Uganda also recorded their first point of the competition with a 2 -1 victory over the stallions of Burkina Faso.

19-year old Junior Yunus Sentamu scored both goals for the Cranes yesterday – one in each half.

In the other Group C match played yesterday, the match between the Warriors of Zimbabwe and Morrocco’s Lions of the Atlas ended in a goalless draw.

Tomorrow, Tuesday, January 14th, the Leopards of the Democratic Republic of Congo will take on the Les Mourabitones of Mauritania at the Peter Mokoba stadium, Polokwane.

In the second game of the day, the Panthers of Gabon and the Swallows of Burundi will take to the field in what is expected to be a thrilling encounter.

Photo: A scene from the match between the Walyas and the Mediterranean Knights. (CAF Online)