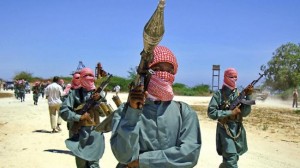 The purported abduction is said to have taken place in the Hodan district in Mogadishu, Somali’s capital.

The Kenyan nationals are said to be civil engineers by profession. Reports indicate that an ex-warlord Mohamed Daylaf, had hired the unidentified Kenyans to construct his petrol station.

The culprits responsible for the supposed abduction are still unknown. However, witnesses state that gunmen in military uniform stopped the vehicle transporting the two Kenyans in the company of two Somalis.

The gunmen then allegedly directed the Kenyans to descend from the car at gunpoint while ordering the Somalis to vacate the area.

According to witness reports, the gunmen then allegedly shoved the two Kenyans into a vehicle and sped off. The motive behind the reported abduction remains unclear. However, al-Shabaab  have claimed responsibility for the kidnapping of numerous Kenyan nationals in Somalia because of Kenya’s military involvement in the war-torn country.

During this attack, unknown gunmen supposedly opened fire on a vehicle carrying the doctors who were en route to Fiqi Hospital to provide medical aid. Also on December 6th last year, unknown gunmen shot a Ugandan female lecturer, Leila Nabulia, who was part of the economics department in Somalia University.

According to witness reports, armed gunmen allegedly shot Leila as she left the university. The lecturer reportedly died upon arrival at the university hospital.

In 2008, gunmen reportedly kidnapped a Kenyan lecturer as he left Mogadishu University. The unknown gunmen were reported to have driven Moses Nyandusi to an unknown location. Fortunately, the gunmen released the lecturer after holding him in captivity for a week. Two Kenyan officials also suffered a similar fate on January 11th, 2012.

According to media reports, al-Shabaab insurgents abducted the Kenyan nationals during an attack in the northeastern region of Kenya. The officers, Edward Yesse and Fredrick Irungu were reportedly kidnapped during an attack in Wajir, close to the Somali border.

Fortunately, the unknown culprits released the officers a year later. Media reports indicate that an unknown number of Kenyan nationals including police officers and armed forces are being held captive by the rebel group in Somalia.

Nevertheless, the government has stated that it is making every effort to secure the release of Kenyans in the custody of the terrorists.

The recently reported abduction comes at a time when the rebel group supposedly reiterated its threat against foreigners. The Somali regime has not yet released any statement regarding the latest reported abduction of Kenyan nationals.