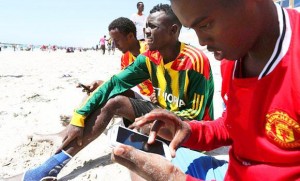 In recent years, al-Shabaab, a rebel militant group in Somalia, has reportedly banned smoking, watching movies, and playing soccer because they are seemingly Western.

Now, the al-Qaeda-linked group has supposedly targeted another thing people have in common with the rest of the world-internet.

The rebel group allegedly banned internet use in the regions it controls in Somalia. According to reports, the militant group recently ordered telecom companies to discontinue the provision of mobile internet services.

The militant group supposedly issued an online statement indicating fears over data use by the United States to target militants. According to reports, the rebel group issued a directive, setting a 15-day deadline for the companies, which the group accuses of being “enemy collaborators.”

The mobile operators that provide 3G data service purportedly declined to comment. According to media reports, the rebel group claimed that the service “corrupts the society’s morals” and permits the enemy to “recognize your movements.”

The alleged statement, which emerged this week, said the decision came amid “spying scandals by the Americans.” The supposed statement also indicated that those who failed to comply would face retaliatory measures and dealt with in accordance with Islamic law.

According to sources, the group frequently executes those accused of spying for Western powers or the Somali government. Although the group was driven out of Mogadishu, the region’s capital in 2011, the militant group still controls numerous central and southern regions of the country.

According to statistics originating from the Internet World, Somalia had over 126,000 internet users in June 2012. Analysts indicate that the figure is set to increase as additional internet services emerge in Mogadishu along with the impending fiber optic cable connection.

Sources reveal that telecom companies have started advertising cost deals ahead of the broadband launch. These firms currently offer internet services via satellite or dial-up. For the last seven years, the militant group has sought to depose the region’s Western-backed regime, imposing stern interpretations of Islamic or sharia law in regions it controls.

Today, the group has lost control over the region’s capital, Mogadishu, and other major cities. However, the rebel group still poses a potent threat. Furthermore, it wages an insurgency, marked by reported car bombings and suicide attacks.

Analysts say the supposed internet ban could hurt the militia’s capacity to spread propaganda and address its followers. The militia reportedly uses platforms such as Facebook and YouTube to disseminate its views.

According to media reports, al-Shabaab has made previous attempts to ban the use of fundamental life products such as music and services such as money transfer. However, these endeavors have purportedly failed.

Still, the group allegedly attacks those who fail to comply with its directives. For instance, the militia claimed responsibility for the bombings that occurred in Kampala, Uganda’s capital in 2010. These reported bombings killed scores of individuals who were watching the World Cup at the time.

Critics have termed the alleged ban as an attempt to cut-off communication from the rest of the world. They further express their concerns because they believe the militia views mobile internet as a means for privacy violation.

Yet, internet access is deemed as a fundamental right in numerous countries, critics maintain. Observers and critics on the other hand, view the alleged ban as ironic especially since the group’s followers supposedly posted the message online.

Sources also say that the tactic of population control through information censorship is not new. However, it has received considerable emphasis due to the reported military setbacks faced by the group in the last two years. With the supposed ban, the world can only wait and see what will take place upon the expiry of the reported deadline.