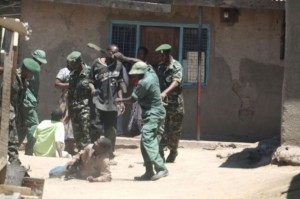 In recent years, the extent of elephant poaching in African countries has reached alarmingly rates.

Primarily being fueled by the soaring demand for tusks in Asia, elephant poaching poses the risk of degenerating into a full blown crisis in affected regions including Kenya, Uganda, Tanzania, Zimbabwe, and Gabon.

Ivory demand has been escalating sharply in Asian nations, such as China, where they are particularly valued and are used for carvings and as ornaments.

The disturbing trend of poaching and illegal trade in animal parts is a problem African nations have struglled to deal with for many years. This disturbing issue had led to the implementation of numerous preventive programs by governments across the continent.

Last year, the Tanzanian government launched a campaign dubbed operation Tokomeza or “Terminate”; aimed at cracking down on suspected poachers.

According to President Jakaya Kikwete, this operation was launched in response to a rising trend of indiscriminate slaughter of elephants in Tanzania. The President revealed that Tanzania had an elephant population of about 350,000 at independence, which has reduced to a meager 55,000, thereby necessitating serious redress.

Consequently, President Kikwete ordered the recruitment of over 2,300 security personnel from the local police, wildlife rangers, and anti-poaching militias in October last year. He explained that the move was aimed at intensifying the ban on rhinoceros and elephant poaching.

However, the Tanzanian government has had to suspend the campaign after it has been subjected to a barrage of criticisms. The suspension occurred following a parliamentary committee report alleging  abuse of human rights and barbaric actions by security forces. The report also made shocking revelations that supposedly confirmed the allegations.

A parliamentary inquiry also reported the death of 13 people, adding that security forces killed or maimed thousands of livestock. During the presentation of the report, James Lembeli, the committee’s chairman, stated that his team is convinced beyond doubt that security forces committed countless atrocities against innocent residents and spread terror.

According to Lembeli, victims comprised local leaders who were humiliated in the presence of their constituents. Lembeli cited the instance of Peter Samwel, a councilor in Meatu district. The councilor alleged that security forces tied his legs and arms with a rope and hung him upside down for a number of hours.

In another case, a woman from Bariadi district claimed that three soldiers raped her at gunpoint.  On the same note, a 38-year old farmer residing in Ulanga district has also made public accusations against security forces. He alleges assault, as well as severe emotional and physical torture.

The farmer alleged that he woke up and found his home surrounded by anti-poaching officers who accused him of illicit hunting. During an interview with Inter Press Service, he claimed that the officers stripped him, poured salt on him, and whipped him in the presence of his 11-year old son.

The farmer’s allegation is one of many to emerge as the government conducts investigations of alleged murder, extortion, rape, and torture by anti-poaching security officers. The reported scandal has since resulted in the dismissal of ministers from tourism, home affairs, livestock development, and defence, reports indicate.

Legislators from different sides of the political divide have asked the dismissed Ministers to take political responsibility for the failed operation. On the other hand, critics such as Issa Shivji, a lawyer and activist, condemned the involvement of military officers in a civilian operation.

He further added that the manner in which the operation took place was shameful on Tanzania. Observers and critics have also called for a speedy investigation into the purported abuses. Meanwhile, reports say that most residents have since fled their homes and are scared to return, despite the suspension of the operation.

Nevertheless, President Kikwete declared his resolve to re-launch the campaign to protect wildlife being threatened by poachers. The President also asserted that the campaign’s implementation would undergo assessment and rectification before it is re-launched.

While relevant bodies await the re-launch of the operation, the affected African countries continue to grapple with the devastating effects of poaching.