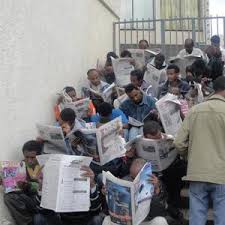 An Ethiopian journalist has been sentenced to two years and nine months in prison for spreading false information, according to a report by the Committee to Protect Journalists (CPJ) today.

On 25th December, the First Instance Court in Hawassa, capital of the state of Southern Nations, Nationalities and Peoples’ Regions, convicted Asfaw Berhanu, former contributor to the private bilingual paper, The Reporter, in connection with a September 4th article he wrote.

According to local journalists, Mr Berhanu’s charge is apparently that he claimed three state officials had been removed from their posts, when they had not actually been dismissed.

Meanwhile, the Reporter issued a front-page retraction in its next edition. According to the publication’s Managing Director, Kaleyesus Berkeley, Mr Berhanu has been officially dismissed from The Reporter.

Local journalists say Mr Berhanu is currently being held in Hawassa Prison and that he plans to appeal his sentence.

“Asfaw Berhanu should not be jailed for making a mistake, especially after the Reporter apologized and issued a retraction,” CPJ’s East Africa Representative Tom Rhodes commented.

“Authorities should release Asfaw from prison immediately,” he added.

On October 10th, three policemen are reported to have visited The Reporter’s office in Addis Ababa where they arrested Managing Editor Melaku Demissie and took him in for questioning in connection with the September 4th news report. However, Melaku Demisse told CPJ that the police commissioner ordered his release the same day.