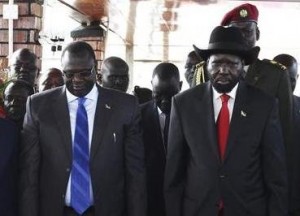 After about to two weeks of fighting, delegates representing the government and warring rebels in South Sudan are heading to Addis Ababa for negotiations, according to Ethiopian officials.

Both convoys are expected to arrive in Addis Ababa and begin talks later in the day. It is currently unclear who will be representing Presdient Kiir, but the convoy representing Reik Machar is reported to be led by Rebecca Garang, wife of the late John Garang.

Prior to this revelation, Reik Machar had demanded that all his colleagues currently being detained by the government be released before any negotiations can take place. Mr Machar recently confirmed that he had indeed agreed to the peacetalks, but warned that he will not call a ceasefire while the talks are ongoing.

The Ethiopian Foreign Ministry earlier revealed that both Mr Machar and President Kiir are expected to also arrive in Addis Ababa later today. However, both men have stated that their departure for Addis Ababa hinges on the outcome of the preliminary discussions between the two groups.

The meeting in Addis Ababa today coincides with the deadline given by the Inter-Governmental Authority on Development (IGAD) for both leaders to meet and discuss the conflict in-person.

President Kiir fired Mr Machar as his deputy in July, along with his entire cabinet reportedly over the regime’s failure to deliver on its promises.

Machar’s militia take control of Bor
Officials from the militia supporting Mr Machar–made up mostly of defected Nuer soldier and white army tribal fighters–are reported to have attacked and taken over parts of Bor this morning.

This is the second time Bor has been taken over by the rebels since the outbreak of violence about two weeks ago.

The South Sudanese army revealed that although it has lost the upperhand, fighting is still ongoing in Bor. The Mayor of Bor, Nhial Majak Nhial told Reuters that “The town is still partly in our hands and partly in the hands of the rebels.”

South Sudanese officials are reported to have issued a warning of an impending battle in Bor prior to this attack by Machar’s forces.

The capital of Jonglei state, Bor, which is only about 125 miles from Juba, was the site of a bloody massacre involving Mr Machar in 1991, where about 2,000 people from the Dinka ethnic group were killed by a Nuer militia.

Observers say Mr Machar is likely to use the cities under his control as a bargaining tool to coerce the government in the ongoing negotiations. Currently, the rebel army is reported to be in control of parts of Bor, Bentiu and Malakal (Upper Nile State).

Following their partial victory in Bor, the rebels have revealed their intent of taking over the capital city,  Juba. Violence initially broke out in Juba in the beginning of the month and quickly spread to other parts of the young South Sudan.

According to the United Nations, up to 180,000 may have been displaced due to the conflict. At least 1,000 people are reported to have been killed in the violence thus far.

Already, the country’s oil production–its number one source of income–is reported to have been cut down significantly due to violence in oil producing regions.

South Sudanese officials revealed earlier that the military had succeeded in securing Melut county in Upper Nile state, which is responsible for about 80% of the nation’s oil production.

Despite the threat of the regime being brought to its knees, President Kiir has vowed not compromise his stand by acquiescing to a power sharing deal.

In an interview with the BBC on Monday he said power sharing “is not an option. This man has rebelled. If you want power, you don’t rebel so that you are awarded with the power.”

Meanwhile, President Musuveni of Uganda has threatened Mr Machar with military action if a peace deal is not reached by the end of today.

The United Nations Security Council has also called on both parties to declare an immediate ceasefire and to “engage directly in direct talks without precondition.”