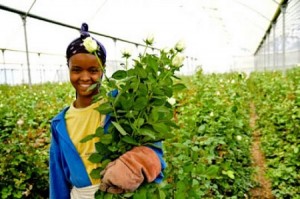 According to a Global Industry Analyst report, Kenya, Zimbabwe and Ecuador are rapidly rising as suppliers in the global horticulture market.

Kenya’s reportedly suitable climatic condition is reported to be one of the most significant factors supporting growth in the sector. Experts say several other east African countries also have the potential to benefit economically by developing the sector.

Pundits say several other East African nations like Ethiopian and Tanzania are already following the footsteps of Kenya.

In the last five years, the Ethiopian flori-culture industry has become the second largest flower exporter in Africa after Kenya.

The Ethiopian Horticulture Producers and Exporters Association recently revealed to the Ethiopian News Agency that revenues generated from the sector is increasing from year to year.

According to a recent report, the country earned 170 million USD from horticulture export in the first 9 months of this fiscal year.

The nation’s main customer’s are reported to be countries in Europe, Middle East, Asia and Americas. Officials say efforts are  being made to expand export destinations and engage foreign investors in the sector.

The government of Ethiopia is also providing incentives to support the sector. The Ethiopian Ministry of Agriculture has revealed that the government is supporting the establishment of about 120 commercial farms in the country.

Tanzania’s plans in the horticulture sector

According to a Research conducted by the Horticulture Development Council of Tanzania (HODECT), by 2021 Tanzania’s horticulture sector will increase its current level of production and export by ten times. One million Tanzanians are expected to be directly employed in the sector.

The research also pin-points the main obstacles of the sector, which are reported to be inadequate promotion, limited access to long term financing, land policy and infrastructure marketing system.

The report commended Ethiopia’s growth in the sector. “Ethiopia has demonstrate how right incentive package can catalyze investment and growth in horticulture,” it reads.

For Kenya, beside favourable climatic condition, good investment policies, institutional support, attractive world-market prices, the improvement in telecommunications technology, as well as the banking and services sectors have also contributed immensely to the growth of horticulture in the country.