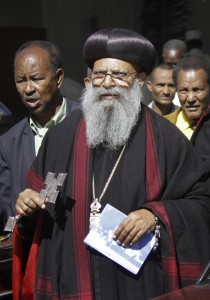 The patriarch of the Ethiopian Orthodox Tawahedo Chruch, Abune Mathias, was placed under house arrest temporarily, but has since been released, according to a report by the Ethiopian Review today.

The move is reported to have been carried out by National Security Adviser to the Prime Minister, Tsegaye Behane, allegedly over the patriarch’s criticism of the ruling Ethiopian People’s Revolutionary Democratic Force (EPRDP).

The Ethiopian Orthodox Church is currently facing a leadership crises and many church leaders have publicly rebelled against the authority of the church, which only split from the Coptic Orthodox Church in 1959.

Abune Mathias was reportedly interrogated for 72 hours before his release. Although the actual reasons for his temporary arrest is unknown, there are speculations that it relates to comments made by the patriarch recently where he revealed that most of the church’s current problems are being created by the state.

The Tigrayan People’s Liberation Front (TPLF), one half of the ruling EPRDP coalition, is also reported to have been the focus of some of the patriarch’s recent critical comments.

This is not the first time Abune Mathias, who was born in the Tigray region, is clashing with the government.

In the 80’s, when he was Bishop of the Ethiopian Orthodox Church in Jerusalem, Abune Mathias was critical of Menghistu Haile Mariam’s regime. His outspokenness eventually caused him to go on exile in the United States of America for about 30 years until the downfall of Meghiatu’s regime.

Abune Mathias, 71, was installed as the 6th patriarch of the Ethiopia Orthodox Church in March 2013 after winning about 500 out of 806 votes cast by an elective council a month earlier. His appointment has since been disputed by many, who say the 4th patriarch Abuna Merkorios should have been reinstated, since he was deposed under questionable circumstances.

Photo: Patriarch of the Ethiopian Orthodox Tawahedo Church after his election in February. (AFP)