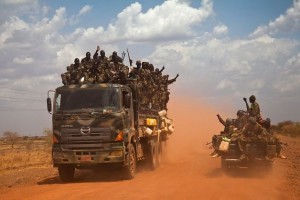 In another news, a UN official in South Sudan has spoken of an atmosphere of fear and desperation as violence escalates.

Humanitarian Co-ordinator Toby Lanzer told the BBC about summary executions in Bor, in the restive state of Jonglei that has fallen to rebels.

Clashes broke out between troops loyal to President Salva Kiir and others backing his former deputy a week ago.

Mr Lanzer says people are clamouring to get into the UN compound in Bor as the violence escalates.

“When I ended up moving to the airport [Sunday] evening, we saw some of the most horrible things that one can imagine.

“People who were being lined up and executed in a summary fashion. This is done by people who are simply out of control,” Mr Lanzer told Newshour.

Meanwhile the US said it had evacuated its citizens from Bor.

Four US service personnel were wounded on Saturday when their aircraft were shot at, delaying an evacuation operation.

US President Barack Obama said he may “take consider further action to support the security of US citizens, personnel and property, including our embassy, in South Sudan”.

Mr Lanzer added that there was a danger not just from fighting by conventional armies but from groups of youths who he said were simply “out of control”.

The government says it is trying to retake Bor, and the state has seen fierce fighting in recent days.

Two Indian peacekeepers and at least 11 civilians were killed in an attack on a UN compound in Akobo, Jonglei, on Thursday.

“One is to call upon all the political leaders to desist from further violence, to heed the African Union call to observe a holiday season truce, open a channel of dialogue and sit down to negotiate their differences peacefully.

“Our other message is that we at the United Nations are here to stay.”

Those reports could not be independently confirmed.

However, on Sunday the 22nd of December, Col Aguer told reporters: “Bentiu is in the hands of a commander who has declared support for Machar.”

He added that the number of people or wounded in the fighting was unclear.

Unity, a state on the border with Sudan, produces much of South Sudan’s oil, which accounts for more than 95% of the country’s economy.

Also on Sunday, the UN Mission in South Sudan said it had begun relocating staff from the capital Juba to the Ugandan city of Entebbe.

Juba has been tense since the unrest began last weekend.

Resident Mogga Lado told the BBC: “I was buying some things for my children in the market on Tuesday when I saw two people dressed in normal civilian clothes shot dead in front of me by people in military clothing.

“I don’t know if they were the army or rebels. I didn’t wait to see.”

Mr Machar told the BBC on Saturday that he was prepared to negotiate with the government if politicians arrested this week were released and transferred to a neutral country such as Ethiopia.

President Kiir, a member of the majority Dinka ethnic group, sacked Mr Machar, who is from the Nuer community, in July.

The violence which broke out in Juba last weekend has since spread, pitting gangs of Nuer and Dinka against each other.