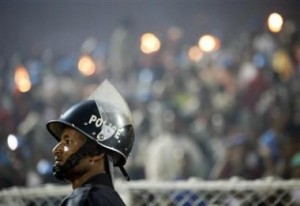 Ethiopian security agencies have arrested 5 people in connection with an explosion in a home in Bole district, Addis Ababa, in October.

According to reports, the explosion occurred in an apartment rented by 2 Somali nationals, who turned out to be Al Shabab suicide bombers. The pair were reportedly planning to detonate the bomb at a stadium packed with fans watching the match between the Walya Antelopes of Ethiopia and the Super Eagles of Nigeria.

The bomb blast, which occurred a few hours before the match, reportedly through an accidental detonation, killed the 2 terrorist and affected several properties nearby. At least 3 suspects are reported to have been arrested at the scene.

Government spokesman Redwan Hussein revealed that among the materials found in the debris were a jacket, a grenade, a belt and a Walyas jersey.  According to him,”If you look at the timing and the location, it might be easily assumed that they were planning to explode [near the stadium] while disguising themselves as fans of the team.”

Recent reports confirms these assumptions about the incident to be correct. According to one suspect in custody,” The plan was to hurl the bomb at crowds gathered around the stadium and the two malls, then enter the stadium and carry out a suicide attack.”

Ethiopia’s Federal Police and National Intelligence and Security Service (NISS) revealed that the 2 suspects had ventured to the scene of their ominous plot on 13th October 2013, but returned to their apartment—apparently due to heavy security at the scene—before the fatal explosion occurred, according to a report by the Ethiopian Radio and Television Agency.

“Heavy police presence must have caused their nervousness and state of agitation which led to the detonation that caused their own deaths,” government spokesman Shimeles Kemal said.

Officials have since confirmed that the suspects are Somalis and that they belonged to the Islamist militant group Al Shabab—who allegedly have claimed responsibility for the failed attack on Twitter.

There had been reports that the suspects accidentally blew themselves up while preparing the explosive to be detonated at a stadium packed with fans watching the match—which the Walyas eventually lost—about 5 miles away. But officials have dismissed this version of the fatal event.

Security on High Alert
Over the past 3 months, the Ethiopian government has—on numerous occasions—issued security alerts against imminent terrorist attacks.

These attacks have largely failed to materialize—probably because of the warning. But Ethiopian security officials say they have stopped numerous terrorist plots in the nation, luckily before they became lethal.

In one notable event, Ethiopian officials are reported to have uncovered two explosives at the Bole International Airport in September, luckily before they exploded.

Ethiopian officials say Al Shabab, as well as other terrorists sponsored by Eritrea are scheming to destabilize Ethiopia through terrorist attacks.

Al Shabab have since declared war on all nations supplying troops to the African Union’s Mission in Somalia. In September, the group attacked a high profile mall in Kenya, killing close to 70 people and injuring over 100 others. But the Ethiopian government has reiterated its commitment to the peace keeping efforts in Somalia. President Hailemariam Desalegn recently noted that he will not order the withdrawal of Ethiopian troops out of Somalia.

Ethiopia has one of the fastest growing economies on the continent. The historic nation has been relatively peaceful and spared from deadly attacks of the magnitude its neighbors have experienced.

Photo: A policeman in a stadium in Addis Ababa. [Radu Sigheti/Reuters]