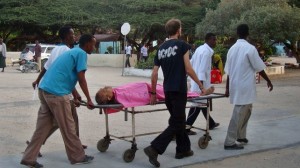 The ambush, which according to the BBC’s Mohamed Moalimu occurred in Siinka Dheer, highlights two important facts; the dangerous conditions aid workers in destabilized nations like Somalia operate in and the fact that terrorism is still a potent threat in Somalia despite recent gains against Al Shabab.

Following the break-down of the Somali central government in 1991 leading to a nationwide civil war, numerous continental and international aid agencies attempted to operate in Somalia. But frequent attacks against aid workers led many agencies to pack up, others have reduced their activities in Somalia—employing more locals, who are regarded less suspicious by the terrorists.

According to local reports, unknown gunmen opened fire on the bus which was on its way to the Fiqi Hospital in Ceelasha Biyaha near Afogye, where the doctors were expected to attend to some patients. The gunmen allegedly bolted the scene immediately after the incident.

Afogye is a former stronghold of Al Shabab, but was recaptured in May last year by African Union (AU) forces in Somalia. The town is an important route lying 30km north-west of Mogadishu, it serves as an intersection between different roads from north, west, and south Somalia.

It is unclear who is behind the attack since Al Shabab have denied responsibility, according to AFP. There are numerous armed groups operating in Somalia, most of them are loosely organized and largely unknown, increasing the difficulty of hunting them down in the semi-lawless nation.

Under the command of Burundian General Silas Ntigurirwa, who took charge of the troops recently, AMISOM has vowed to wrestle the remaining communities from the grips of the terrorists.

While several commentators have hailed the AMISOM initiative, many have quite thoughtfully noted that liberating these areas is the first step to establishing law and order. According to them, locals must be brought on board in order to secure the gains against the terrorists.

History of attacks on aid workers
Across the world, aid workers are one of the most vulnerable to attacks in unstable nations.

According to the Aid Worker Security Database (AWSD), attacks on aid workers peaked in 2011 with about 308 victims of 151 attacks. Last year, although the rate of attacks increased to 167, the number of victims reduced to 274.

Somalia, ridden by over a decade of war, has been described as one of the most dangerous places in the world. Next to South Sudan, Somalia recorded the highest number of attacks on health workers last year.

Photo: An injured Medicins Sans Frontieres (MSF) worker on a stretcher after being shot in Mogadishu earlier in 2011. [RTE]