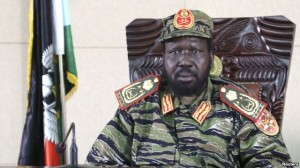 According to reports, on Wednesday the renegade soldiers attacked military bases in Pan-pandiar and Mulual-chaat, Bor with heavy artillery, forcing hundreds of soldiers and civilians to flee into nearby bushes. The soldiers are also reported to have attacked other areas mostly inhabited by civilians.

2 top military officers from the Dinka ethnic group are reported to have been killed in the clash which is colored with ethnic rivalry. South Sudanese Red Cross officials say at least 19 bodies have been discovered in residential areas. 3 children are also reported to have drowned while attempting to cross the Nile yesterday, bringing the official death toll of the city to about 27. But with many people unaccounted for, observers fear the toll will increase.

Nationally, the death toll currently stands at over 500, with hundreds injured, according to the United Nations Mission in South Sudan (UNMISS) over 20,000 people have been displaced since the fighting broke out in Juba on Sunday.

South Sudan Liberation Army (SPLA) spokesperson Col. Philip Aguer told the press yesterday that the nation’s security agencies were still gathering information about the incident, as renegade-General Gatdet ceased communication with the headquarters after breaking rank. He however noted that the military is currently deliberating on the situation and is expected to put a plan into motion shortly.

In a statement released earlier today, UNMISS confirmed that “security conditions the Jonglei State capital Bor have deteriorated significantly during the course of the day.”

The statement also reveals that “The violence triggered an exodus of civilians out of Bor, and thousands have sought shelter at the Mission’s compound on the southeastern outskirts of the city.”

Several state officials, including acting Jonglei state governor Jon Kong Nyon, are reported to be among those hiding in the UNMISS compound, where a number of tents have since been erected.

Tribal dimension to conflict
When fighting broke out in South Sudan’s capital Juba on Monday, officials revealed it had been a clash between soldiers loyal to former Vice President Reik Machar, and those loyal to President Salva Kiir.

Despite attempts by some South Sudanese officials to de-link the ties between Sunday’s clash and the nation’s historical ethnic rivalry, the connections are likely to have firmly been established with grave consequences for the ongoing conflict.

There are reports that General Peter Getdat defected because he adjudged the clashes in Juba to be armed conflict between the Dinka and Nuer ethnic groups.

According to some pundits, it is likely that in the aftermath of the foiled takeover attempt on the army barracks in Juba on Sunday, Nuer soldier may have been treated with suspicion—especially in light of the fact that the alleged coup d’etat was pinned on the former vice president, who is a Nuer.

South Sudan is home to numerous ethnic groups who formed into a fragile alliance to fight for their rights against the Sudanese government. Following the referendum to break away from Sudan in 2011, ethnic clashes have increased with thousands dead and many more displaced.

Numerous continental and international agencies have called on the government of South Sudan to do more to prevent this un-wanton tribal conflicts, which is reported to be usually inspired by struggles for access to limited natural resources, such as grazing land.

Searching for peace
Despite reports of ex-officials being hunted, President Kiir on Wednesday said “We are open for dialogue with anyone who is willing.”

The President’s remarks, made to reporters in Juba yesterday, came shortly after reports that Rebecca Garang and Pagan Amun, former SPLM secretary general, had been arrested.

While many commentators have highlighted this contradiction, many others have noted that President Kiir’s gesture may point to a way out of this impasse.

In a recent interview with Sudan Tribune, South Sudan’s former Vice President Reik Machar revealed that “There was no coup. What took place in Juba was a misunderstanding between presidential guards within their division. It was not a coup attempt. I have no connection with or knowledge of any coup attempt.”

Meanwhile, several governments and international organizations have called on the South Sudanese government to restore peace and order to the nation.

Ban Ki Moon, the UN Secretary General, revealed that he had been in contact with President Salva Kiir of South Sudan on Wednesday and reportedly urged “him to do everything possible he can to end the violence and to ensure respect for human rights and the rule of law.”

The United States Ambassador to South Sudan is also reported to have been in contact with President Kiir on Wednesday over the current crisis. The US has since ordered all her citizens in Juba to vacate over fears of escalating violence.

Meanwhile, there are reports that airports in Juba and Bor have been indefinitely shut owing to the outbreak of violence.