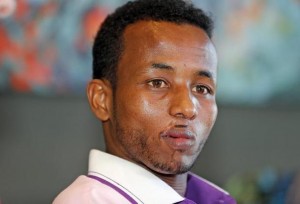 Mohamed Abdulle can finally smile. Something he was unable to do for 20 years.

The Somalian refugee received a life changing surgery from doctors at John Peter Smith Hospital, according to a report by CBS Local.

Abdulle fled Somalia on foot during the country’s civil war when he was 8 years old. His mother was dead and his father and sister disappeared amid the chaos. He and his two brothers joined up with other refugees as they fled their war torn country.

At the age 10, at a camp near the Somalia-Kenya border, Abdulle was attacked by a 12-foot snake.

He woke up to the snake biting his face and tried to fight it off. His screams woke up his companions who said the snake had been trying to swallow him.

His companions were able to fight the snake off and kill it before it killed Abdulle.

After the attack, Abdulle was swollen from the poison and was blinded for two years before he regained sight. He later developed an infection left him without an upper lip. Unable to close his mouth, he was sensitive to heat and cold.

“His gum was real swollen and he started bleeding real bad so he couldn’t eat, he couldn’t do anything,” said Asli Parker, president of the Somali Community Peace Effort in Fort Worth and an employee and interpreter at the Family Health Clinic.

After fleeing to Kenya, then Uganda, Abdulle registered as a refugee and finally made it to the United States in 2010, where surgeon Fayette Williams, faculty member in the Department of Oral and Maxillofacial Surgery, agreed to help.

It’s a surgery most commonly performed on patients with lip cancer.

Though he was able to regain two lips, his bite and teeth also needed help.

Dr. John Kelley, a Fort Worth Orthodontist, stepped in to help.

It was a dream come true for Abdulle.

“Lip or no lip, he smiled every time he came to the office,” Kelley said.

After three years of treatment, Abdulle’s transformation is finally complete.

Despite the language barrier, Abdulle thanked his doctors profusely.

And while Abdulle is grateful to his doctors for helping him now have a normal life, the doctors are grateful to Abdulle for showing them what courage and grace is all about.

“It’s courage at the highest level and it’s the human spirit that is unquenchable and it’s been very inspiring for all of us,” Dr. Kelley said.

Abdulle says he is looking forward to dating and marriage.