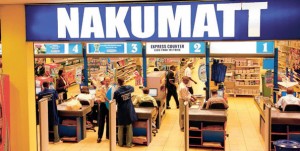 East Africa’s leading retail chain, Nakumatt Holdings, has opened its sixth outlet in Uganda in the commercial town of Entebbe.

Nakumatt Uganda’s country manager Bernard Mutua says the store which is located in the Ultra modern Victoria Mall close to the Entebbe International Airport is expected to raise Entebbe’s profile as a regional commercial hub. It is part of the company’s strategic expansion program, which seeks to promote regional integration by opening retail stores in all major Ugandan towns.

”By opening the sixth Nakumatt Branch in Uganda at Entebbe, we have made a firm statement that we remain Uganda’s partner in progress,” said Mutua.

The company has also made plans to open its seventh branch at the Acacia Mall at Kisementi in the outskirts of Kampala.

The new Entebbe branch, which covers 30,000 square feet, was constructed at a cost of $ 2.1 million. Various retail amenities were imported from Italy in line with the company’s vision to raise local retail standards.

The store features a bakery, butchery and hot food deli, all of which are expected to complement services offered by other stores at the mall including banks, casinos, hotels and clothing stores.

At the recent opening of the Nakumatt store in Bugolobi, Nakumatt Holdings Managing Director Mr Atul Shah said “we are encouraged by the steps taken by the East Africa community members and we shall continue to play our part to ensure that the current dream for a common market and community is realized.”

The support extended by our Smart customers in Uganda and the respective Uganda Government agencies has also helped to inspire our continued expansion in the fast growing Pearl of Africa Market,” he added.

Nakumatt holdings was established 48 years ago in Nakuru, Kenya. The company currently has twenty-nine outlets in Kenya, six in Uganda, two in Rwanda and one in Tanzania.