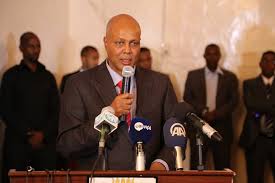 President Hassan Sheikh Mohamud of Somalia has appointed a new prime minister to assist him in governing the embattled nation.

At a press conference in the presidential palace yesterday, President Mohamud revealed that he had selected Abdiweli Sheikh Ahmed as the new PM. Ahmed takes over from Adbi Farah Shirdon, who was ousted in a historic no-confidence vote by the nation’s parliament following a disagreement with the president over his cabinet appointments.

“I have appointed Abdiweli Sheikh Ahmed, whom I believe is the man best equipped to lead the Somali government through the next stage of our country’s recovery and reform programme,” President Hassan said.

The new PM was born in Bardera, in the south Gedo region of Somalia in 1959. Following the collapse of Somalia’s central government in 1991 and the subsequent outbreak of civil war, Ahmed eloped to Canada where he has since been granted citizenship. The incumbent PM is a professional economist and has worked with several internationally recognized establishments including the AU, UN, OIC, ECOWAS, IGAD, Arab League, Asian Development Bank, Arab Development Funds, World bank, Bank of Canada, Islamic Development Bank and the Common Market for East, Central Africa (COMESA) and MISK Enterprises.

Many pundits have welcomed the appointment of Ahmed, noting that his expertise as an economist would be crucial in steering Somalia towards some form of economic growth. Despite his relative lack of experience in politics, pundits say he would be influential in attracting foreign investors due to his international economic credentials.

“Although there is no mistaking the enormous challenges we face as a country I am confident he has what it takes to make a really positive difference in a short time.” President Mohamud remarked.

On his part, the incumbent PM is reported to have said “I hope that I will fulfill the duties I am entrusted with, and if parliament approves my nomination, I will swiftly name a high caliber cabinet.”

For many years, Somali authorities have struggled to establish law and order in the vast nation. However in the past two years, and with the support of the United Nations (UN) and African Union (UN), the Somali government has successfully liberated several regions controlled by the Islamist terrorist group Al Shabab in northern Somalia.

Several commentators insist that the consolidation of the nation’s security is a necessary conditions for any form of stable and measurable economic progress.