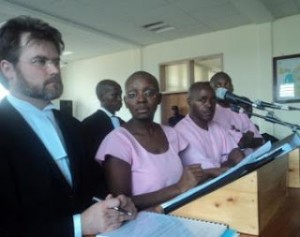 Rwanda’s Supreme Court has upheld and increased the sentence of a leading government opposition figure, Victoire Ingabire, who was charged with terrorism, inciting revolt and “belittling” the 1994 genocide.

Ingabire, 45, is the chairperson of Unified Democratic Forces (UDF), Rwanda’s main opposition party which was formed through a coalition of three parties in 2006. She was initially arrested in April 2010 after returning from 16 years of exile in the Netherlands to run for the country’s August 2010 elections. However, due to her arrest and the alleged refusal by Rwandan authorities to register the UDF prior to the elections, Ingabire was barred from running.

After implicitly denying claims that her case was fabricated by the ruling government, the Supreme court increased her sentence from 8 to 15 years. According to reports, the prosecution had requested that she be handed a death penalty, but the court refused the request. The Judges noted that the fact that this was her first encounter with the Rwandan courts and also the fact that her family still resided in the Netherlands contributed to the leniency of her sentence, which according to reports should have been about 27 years.

“We are disappointed, of course, but we are going to wait for the written verdict which will be available as of next week,” her lawyer, Iain Edwards, noted.

Despite the latest verdict, the UDF have reiterated their quest to fight for democracy and good governance in Rwanda. As the judges read her verdict, Ingabire is reported to have exclaimed “the fight continues.”

In 1994, the assassination of Rwandan President Juvenal Habyarimana and Burunidan President Cyprien Ntaryamira through a plane explosion sparked off ethnic clashes in Rwanda, during which mainly Tutsi people and some moderate Hutus were killed by the Hutu-dominated government. In about 100 days, about 20% of the nation’s population were exterminated with brutality.

President Paul Kagame’s Tutsi-dominated Rwandan Patriotic Front (RPF), which had been involved in armed rebellion in Uganda and northern Rwanda, was instrumental in ending the mass murder spree. The incident has since been recognized as a genocide by the international community.

Several years after the genocide, Rwanda still tends to scars from that outbreak of violence. The ruling RPF is accused of ethnic bias and the country’s democratic credentials are being stringently questioned by several commentators. Several opposition members are currently reported to either be in jail or in exile.

Although President Kagame enjoys widespread support from the international community, many commentators have described his regime as “repressive”, noting that the international community’s continual support for President Kagame is related to his daring economic initiatives, which have led the nation’s economy to record impressive growth in the past 2 years.

Photo: Victoire Ingabire in court with her lawyer Ian Edwards in 2010.