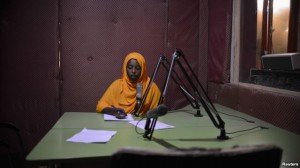 On Monday, a Somali court sentenced an unidentified woman to jail for alleging she was raped on the radio. The journalists who interviewed and aired her story were also sentenced.

They group were reportedly found guilty of defamation and insulting state institutions.

The 19-year old woman, who is also a journalist, had already served three weeks in pre-detention before she was found guilty of defamation and lying. She is to serve a six-month jail sentence.

The journalists who aired her story on radio were also sentenced to one year and six months each, alternatively they can pay fines to be released early.  The manager of the station, Radio Shabelle, Abdulmalik Yusuf was also found culpable of offending State institutions and defaming government officials. He was given a one year jail sentence, but has been released after paying a fine.

The two men, who allegedly raped the woman, are also journalists and have not been arrested or arraigned before any court.

This is not the first time the Somali government, which has repeatedly declared its stand against sexual offences, has imprisoned a woman for speaking about being raped in public. In February and August similar incidents occurred, where women who alleged they were raped on air were sentenced and detained along with the journalists who interviewed them.

Delicate Subject for a Deeply Traditional and Religious Society
Cases involving rape and other sexual violations are considered highly delicate topics in Somalia and not usually spoken about publicly.

The 19-year old woman in the interview with Radio Shabelle accused two men, who work at the state-owned Radio Mogadishu, of raping her at gunpoint. Shabelle, a privately owned media network, posted videos of the interview online and it has since gone viral.

The western-backed Somali government has come under a barrage of criticisms from the international community for the sentences, but the government has defended the ruling of the court.

On Tuesday, the Somali government’s spokesperson Ridwaan Haji said in a statement that the government is confident in its independent judiciary and stressed the importance of supporting state institutions in their infancy.

“We have an independent judiciary in Somalia and the government cannot and must not be involved in the administration of justice,” he said.

“Our new, independent judiciary, like many institutions in the new Somalia, is in its infancy. It will take time to develop and evolve into an institution that delivers justice effectively and inspire public confidence.”

Photo: A reporter reads the news in Radio Shabelle studio in 2012. [Reuters]