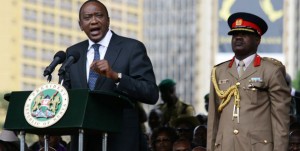 President Uhuru Kenyatta has created a new unit under the Kenyan Defense Force (KDF) –the Nairobi Metropolitan Command—to deal with the threat of terrorism and crime in the nation’s capital.

According to a statement by Kenya’s Ministry of Defense yesterday, “The new command is as a result of the current threat posture in the country emerging from terrorism, drug trafficking, proliferation of small arms, crime among others that tend to flourish in highly urbanized areas.”

Since the attack on the Westgate mall in Nairobi’s Westlands neighborhood in September, the Kenyan government has put the nation’s security on high alert several times, saying attacks were imminent.

The Kenyan government is also reported to have introduced community policing and increased the surveillance of its border regions since the deadly attack, which left close to 80 people dead.

Kenya shares an eastern border with Somalia from which it is suspected that terrorists filter into the country illegally. The Westgate suspects are reported to have entered into Kenya through this route before planning for months and eventually carrying out their deadly attack.

Currently, the KDF is divided into two sections; East and West.

Photo: President Kenyatta flanked by a KDF officer as he delivers a speech earlier in the year.