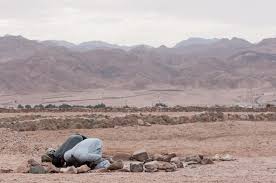 Egypt’s Sinai Peninsula is a tourist destination, with its white sand beaches and crystal-blue water. Water sports and beautiful mountains draw tour groups from all over the world. Yet parts of the peninsula are lawless regions where insurgents regularly attack security forces. It’s also a smuggling hotspot, and over the past few years, thousands of Eritrean, Ethiopian, and Somali immigrants – hoping for a better life – have been trafficked through the peninsula, many hoping to make it to Israel.

On a rainy afternoon in Cairo’s al-Azhar Park, a group of 12 Eritrean youth meet to draw pictures of umbrellas under the grey sky. All are victims of human-trafficking rings in the Sinai Peninsula. Sitting in a circle on the wet grass, the youth are participating in a group workshop meant to teach them how to deal with stress and find a positive outlet for the frustration, fear and anger they feel.

Habtom’s dreadlocked hair is the topic of the hour. He jokes with one of the NGO outreach workers, and they playfully argue about whether or not he should cut the hair. “I’m telling him to cut it, because it makes him a target on the street and he stands out to Egyptians.” The NGO, which does not operate with the Egyptian government’s permission, asked not to be named.

According to the United Nations High Commissioner for Refugees (UNHCR) and Human Rights Watch, Eritreans are the most commonly trafficked people in the Sinai. Perhaps due to the diaspora of Eritreans worldwide, traffickers believe they can extract the most profit, exploiting the desire for a better life that motivates many Eritreans to leave their homeland.

“When I left Eritrea, I knew I was going to end up in Sudan. But I didn’t know where I would be after. Somewhere with protections, I hoped,” says Mohamed, an 18-year-old victim of trafficking who declined to give his last name. Considered one of the most repressive and secretive states on the planet, Eritrea requires mandatory military service, and those who do not wish to join are viewed as traitors. Once an Eritrean leaves, he or she can never return for fear of retribution.

“Sometimes when I walk down the streets, people throw stones at me,” says Nabiet, a 15-year-old girl with tightly woven braids and a small picture of Jesus hanging from a chain around her neck. Nabiet, who says she never wanted to leave Eritrea in the first place, was kidnapped from her home country and brought to the Sinai, then held for ransom. Full of energy yet shy, she grins when she speaks about her memories of English class in school. But the smile disappears when she recounts her challenges in Egypt.

“One time I was shoved by a women into traffic, and hit by the car. She didn’t even stop to apologise,” she says angrily. “The driver got out and apologised a lot. But the woman, she said nothing.”

Like many refugees, the youth have difficulty integrating into Egyptian society. The smugglers who trafficked the youth through the Sinai are often the only Egyptians with whom the Eritreans have had contact. Accordingly, they’re nervous around Egyptians, and most don’t learn how to speak Arabic. Eritreans in Cairo are often the victims of attacks and unwanted attention.

“When you rent a place, when they [Egyptians in the neighbourhood] find out you are new, they come to you almost every day with a knife. And they threaten you,” says Habtom.

Leaving the Sinai doesn’t always mean leaving the captors behind. In some cases, captors follow their victims to Cairo, harassing and threatening their families in an attempt to extract even more money. Operating elusively, the criminals are part of well-connected gangs, and are difficult to apprehend. Aid groups help the youth and offer a certain level of protection, but it is often not enough. “They attacked us in our house and they stole our mobiles and even cut my friend,” says Ramodan, an Eritrean refugee. “But there are good Egyptians, who respect refugees.”

Local NGOs work to co-ordinate efforts to provide for the youth. Staffed primarily by Egyptians, they work to provide the tools needed to move forward. All five girls in the group were victims of rape while in the Sinai. “The difficulty of the [psychological anxiety] is that you live in constant reminder of the event, with nightmares and traumas when they recall the event. They develop trust issues, become cautious and guarded in their dealings with other human beings,” says Georgette Savvides, a psychologist based in Cairo. “They feel isolated, and it’s a big package of psychological difficulties.”

During the group sessions, the refugees begin to act like regular teenagers who relax, laugh and even flirt. “When we first started, they were pretty quiet. But over the last few sessions, they’ve become really involved,” says Andy, one of the group leaders, an Australian who recently moved to Cairo to help refugees integrate. As the afternoon progresses, some emerge from their shells.

The Eritreans in the park are all under the age of 19. Still minors, they receive money from relief organisations to pay for food and housing. After Mohamed was shot, funds from the group Caritas covered the medical expenses from the hospital. Mohamed, along with many of the youth, will lose their status as minors next year. In a country already crippled by high youth unemployment, job prospects for refugees are virtually non-existent. Work permits are elusive, and most only have their UNHCR refugee cards for identification.

School is also an obstacle. Refugees have a difficult time obtaining education in Cairo. The only options left to the Eritreans are private lessons and tutoring. Nabiet says she wants to go back to school. “I hear about courses, and I need papers from [my case worker]. But then when I bring them to the people who give the courses, they say there are no more spots.”

What is most damaging to the youth is not their difficult pasts, nor the turbulent present. It is the future which is more of an abstract idea than a practical reality. It is with resignation that they discuss ambition and where they envision themselves after Egypt. Joking after the meeting, brief smiles betray grimaces and it is tempting to forget a generation of Eritreans is being lost each day in the Sinai desert.