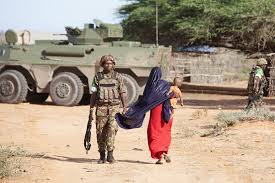 More than 30 people have been killed in ethnic clashes in the town of Moyale in the past week.

Aljazeera reported on December 8th that at least 10 people were killed on Saturday in the town of Moyale, northern Kenya, where troops have been sent to stop a week of fighting between rival ethnic groups.

The latest deaths bring the toll in the town to more than 30 in the past week, as fighting sent thousands of residents fleeing into neighbouring Ethiopia.

Officials and aid workers in Marsabit county said several houses in the town had been burned down. Villages have been razed to the ground and around 20,000 people forced to flee across the border to neighbouring Ethiopia during unrest around the town of Moyale in Marsabit county.

According to Kenyan newspaper The Standard, the death toll stands at just over two dozen, while Kenyan campaigner Jaffer Isaak believes between 70 and 120 people have been killed.

There were reports of heavy fighting continuing in Moyale on Saturday, with gunfire heard in the area and smoke rising over the town. Some of those involved in the clashes were reportedly carrying automatic weapons and machetes, and wearing military-style uniforms.

“We are yet to assess the number of people killed and those displaced but I am confident the situation is about to be contained,” said Issiah Nakoru, Marsabit county commissioner.

Tom Omolo, Kenya Red Cross regional disaster coordinator, told Reuters his staff were unable to reach the areas where there was fighting.

“The whole area is a battlefield, we cannot send our team to help those people injured, offer rescue or assistance, neither can we establish how many people have been killed or injured – but we can still hear heavy gun shots,” he said.

Rural communities in northern Kenya have long clashed over the control of valuable grazing land, but the fighting in the town of Moyale has marked an escalation in tension.

Residents say politicians in the region, some 800km from the capital Nairobi, are using clan militia to jostle for power in new local administrations that have been formed since the March 4th election, and to settle old scores.

More than 20,000 people have fled into Ethiopia, residents and a Kenya Red Cross worker have said.

The government sent an unspecified number of troops from the Kenya Defence Forces to Marsabit, Samburu, Pokot and Turkana counties on Friday to restore peace.

The arid northern region of Kenya is also awash with guns due to its proximity to unstable neighbours such as Somalia, where al-Qaeda-linked rebels have been fighting to topple the government, and Ethiopia, where rebel fighters have made sporadic incursions into Kenya.

The fighting in Moyale, in Marsabit near the border with Ethiopia, is between rival ethnic groups – Borana on one side and an alliance of Gabra and Burji on the other, battling with guns and mortars.

Tit-for-tat clashes have also been reported this month in the northwestern Turkana region, an area where Tullow Oil has discovered oil deposits.

More than 10 people have been killed in those clashes, and thousands displaced.

Although Tullow’s operations have not been affected by the fighting, the oil company was forced to temporarily halt drilling for two weeks in October after local residents stormed their drilling sites demanding more jobs and benefits.