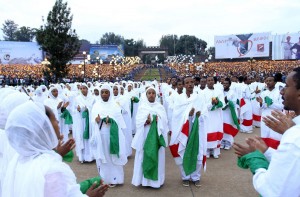 UNESCO has inscribed Meskel commemoration feast of the finding of the True Holy Cross of Christ on the Representative List of the Intangible Cultural Heritage of Humanity. UNESCO selected the Meskel festival from among the 31 heritages presented to its 8th Conference of intangible cultural heritages.

According to UNESCO, the inscription of Meskel festival on the Representative List could enhance the visibility of intangible cultural heritage and promote inter-cultural dialogue among the multi-ethnic population of Ethiopia as well as other communities internationally. “Rooted in the religious and cultural traditions of Ethiopia and passed on from generation to generation, the Meskel festival promotes social unity, integration and diversity across the nation,” UNESCO announced.

Executive Director of Ethiopia’s Heritages Conservation Authority, Yonas Desta added his office is trying to get two other Ethiopian intangible heritages included in the UNESCO list before the end of the GTP.

The festival of Maskel is celebrated across Ethiopia on the 26th of September to commemorate the unearthing of the True Holy Cross of Christ.

Celebrations begin with the building of the Damera bonfire in Maskel Square in Addis Ababa – a conical pyre of poles surrounded by bundles of branches and torches, decorated with green grass and Abyssinian daisies symbolizing the New Year.

Hundreds of thousands of people from diverse communities flock to the square as colourfully dressed priests chant hymns and prayers and perform their unique rhythmic dance in front of the pyre. At the climax, the patriarch of the Ethiopian Orthodox Tewahedo Church lights the bonfire. Maskel is celebrated nationwide regardless of age, gender, language or ethnicity.

Participants are believed to receive spiritual rewards from the celebration and blessings from the Holy Cross. Local churches play a key role in coordinating communities and safeguarding the element. The festival is also a time when families get together and migrant workers return home – reunions that result in the inflow of money, information and new ideas from urban centres to rural areas.

Prior to the celebration, personal quarrels and social disagreements must be resolved. In this way, Maskel is an occasion for Ethiopians to promote their spiritual life through reconciliation, social cohesion and peaceful coexistence.

Tourists who take part in the celebrations often find an urge to come again and again to witness the sheer pleasure and surprise that the festival offers. Many indeed return repeatedly, some for a fifth of sixth time. They fall in love with a festival which offers unique chants and different theatrical scenes. Meskel is unique also as a festival which draws people in thousands and thousands and is observed with calmness and serenity without any worries over security. It offers a colourful ceremony that people of many different confessions and faiths can attend, demonstrating their solidarity and the country’s heritage of unity in diversity – something that one finds all-too-rarely on our planet.