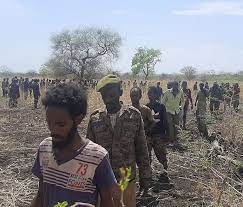 The Tigray People’s Liberation Front (TPLF) which is fighting the government in northern Ethiopia has suffered humiliating defeat as its forces tried to cross into Amhara region from neighboring Sudan.

At least 80 troops of the Tigrayan forces were killed amid the heavy fighting and 30 others wounded or surrendered at the fighting that took place at Gonder-Metema border area in Amhara region.

The number of troops who were killed from the government side is not known. According to information reaching Zegabi.com, those troops who surrendered to the national army confessed that they had a mission of destabilizing Ethiopia and weakening the Amhara regional government.

The Tigrayan forces reportedly to have a strength of 200 troops also confessed that they had received military training in Sudan.

The National Defense and Amhara Special Forces reportedly shared the modern weapons among them after end of the heavy fighting.

Meanwhile, Ethiopia has inked a partnership agreement with US firm, Swel and Associates (NSAI) to access the potential of the country’s oil and gas resources.

The agreement was signed between Minister of Mines Takele Uma and Vice President and Team Leader of NSAI, IJoseph M. Wolfe, in Addis Ababa on Tuesday.

As per the agreement, the firm will carry out surveys and feasibility studies in Ogaden, Somali Region based on explorations conducted so far at 3,500 Square Kilometres area in the region.

“These surveys will help the natural gas resource to be utilized for fertilizer and energy investments,” said Mining minister Takeke Uman.