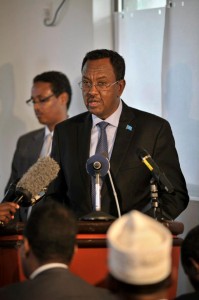 Somali Prime Minister Abdi Farah Shirdon has been asked to leave office after losing a vote of confidence in parliament on Monday.

Somali MPs voted overwhelmingly for the Prime Minter and his 10 member cabinet to be impeached, citing incompetence as the main reason. Out of 250 MPs present, 184 supported the motion.

The Speaker of parliament Mohamed Osman Jawari declared the results of the three day vote and said according to the constitution, the President, Hassan Sheikh Mohamud has 30 days to nominate a new Prime Minster, but until then the deposed cabinet will continue to serve.

The Prime Minister, a relative newcomer to Somali politics, was nominated in October last year by President Sheikh Mohamud–his friend. But the pair fell out over the selection of the members of cabinet, which was set for reshuffling.

PM Shirdon’s effort to fire some of the President’s close allies from the cabinet last month was the last straw that broke their relationship, and President Mohamud asked Shirdon to resign. Following his refusal to comply, his fate was left in the hands of the parliament.

Previous Somali governments have fallen because of internal conflicts between Presidents and Prime Ministers. This has also negatively affected the country’s on-going war against Islamist militants Al Shabab.

Several political analysts and diplomats have called for the quick nomination of a new Prime Minster to secure the political structure of the country and the hard earned victories against al-Shabab.

While there is a legitimate reason to be concerned given Somalia’s unstable history, Nicholas Kay, the UN’s special representative to Somalia has noted that it was a sign of political growth that the newly formed government used constitutional means to oust the Prime Minster.

“This unprecedented piece of parliamentary business was managed in accordance with the provisional constitutional and the rules of procedure of parliament. ” he said.

The President and Prime Minster came to power some months ago as part of a U.N initiative to help Somalia develop a stable central government after decades of civil war.

The Prime Minister Abdi Farah Shirdon spoke to the BBC before the results of the votes was announced, saying he is willing to obey any decision the parliament takes and stay in office until the President nominates a new Prime Minister.