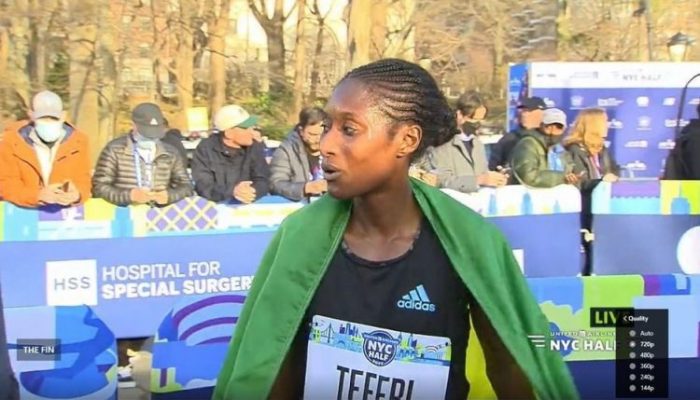 Ethiopia’s Senbere Teferi on Sunday won the 21km women’s race at the New York City half marathon held on Sunday in New York.

Senbere took first place with a dramatic finish in the women’s race with a record time of 1:07:35.

Sembere took charge of the race with 1km remaining but Irene Cheptei gave her a hard time as she remained on her shoulder till the 50 meter that the Ethiopian made a final kick to forge ahead and cut the tape in a time of 1:0735 with Cheptai forced to settle in second place when she crossed the line two seconds later.

On Saturday, Ethiopia won a gold and Bronze medals in the women’s 3000m title on the first day of the world indoor track and field championships in Belgrade, Serbia.

Athlete Lemlem Hailu finished the women’s 3000m with a composed performance on Friday night, crossing the line in 8:41.82, according Athletics Wold report.

Her victory meant the title came home for the ninth time in the last 10 editions. Her compatriot Ejgayehu Taye also finished third to win bronze for Ethiopia in 8:42.23.