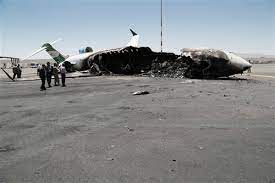 Unidentified airplane has been destroyed in a drone raid by the Ethiopian air force at Shire airport in the country’s Tigray regional state, local reports have said.

The airplane which allegedly had been loaded with weapons and took off from one of Sudan’s airports was destroyed after it landed at Shire airport.

Information reaching Zegabi.com said the airplane was completely ruined while unloading the weapons. Neither the Tigray’s People’s Liberation Front (TPLF) ) which is fighting the government in northern Ethiopia nor the federal government commented on the matter.

Local media outlets have unveiled that airplanes have been allegedly transporting weapons to Mekele, capital of Tigray and Shire town from Sudan and by extension from Egypt.

Meanwhile, the Amhara Special Force demanded the regional government to re-appoint Brigadier General Tefera Mamo as commander of the force.

Members of the Amhara Special Force also demanded the regional administration consider negotiating with the federal government on the return of Gedu Andargachew as executive member of the ruling Prosperity Party (PP).

The angry members of the Amhara special force, who complained over unpaid salaries for three months, warned to join the Amhara popular force otherwise known as Fano fighters if the government is not making monthly payments.

Representatives of the special force warned that there will be massive protests if the regional government does not re-appointing Brigadier General Tefera Mamo as commander of the force.