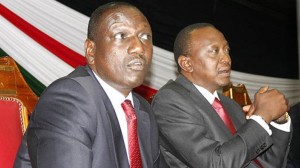 The ICC has changed its ruling on a request put forth by Kenya concerning the trials of Kenya’s President Uhuru Kenyatta and his deputy William Ruto.

According to the latest ruling made on Wednesday, the leaders will no longer have to be physically present at The Hague and can have their lawyers represent them.  This change comes after the Assembly of State Parties amended some of the courts’ rules.

The Kenyan delegation to The Hague welcomed the changes as a victory and thanked the delegates for addressing the country’s concerns.  The group also calling for the venue of trials to be changed.

“We have achieved a fundamental change in how the ICC functions. This is a major victory for the Kenyan team. It is significant in how the ICC engages,” Foreign Secretary Amina Mohamed said on Thursday after the ruling.

The United States also the amendments as progressive, given the peculiar nature of the case.

The U.S.’s representative to the UN Samantha Power said “We have taken seriously Kenyan concerns about the ongoing trial proceedings. The situation the ICC is confronting in the Kenya cases is a new one. The ICC has never before tried a defendant who is also a sitting head-of-state and who appeared voluntarily in Court.”

President Kenyatta is the first sitting President on trial at The Hague. In the past few months, Kenya and the African Union have expressed concerns over the fact that President Kenyatta’s trial is set to come on despite his national duties, adding that the trial belittled his position as President.

When the UN Security Council met earlier this month they refused a request from the African Union to postpone the ICC’s trial of President Kenyatta and Deputy William Ruto.

The ICC’s trial chamber said in a statement that, as a general rule, when Mr. Kenyatta’s trial starts in February, he is expected to be present in Court. However the court has reversed its earlier decision after “legal clarifications provided by the Appeals Chamber in its recent judgment on the matter.

“Any future requests to be excused from attending parts of the trial will be considered on a case by case basis,” the statement added.

Deputy William Ruto’s trial commenced in September but has been adjourned for a week to allow him deal with matters at home related to the deadly Westgate mall attack in Nairobi which left 67 people dead and many injured.