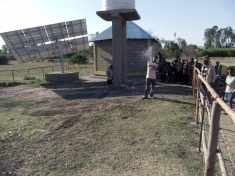 Two U.S. companies have been awarded a contract to construct and operate three 100MW solar power stations in eastern Ethiopia.

According to a press release by the two companies, Global Trade & Development Consulting and Energy Ventures, the contract was awarded by the board of directors of the Ethiopian Electric Power Corporation and the Ethiopian Ministry of Water and Energy for an undisclosed amount.

Speaking on the viability of harnessing solar energy in Ethiopia, the CEO of Global Trade & Development Consulting Dr. Yonnas Kefle revealed that the company “spent several months analyzing the potential for a large-scale solar project in Ethiopia. We found that Ethiopia has some of the highest solar irradiance factors in Africa.”

This project is reportedly part of the Ethiopian government’s integrated energy strategy, which the authorities hope can lead the nation to its ambitious goal of increasing its power generation capacity to about 20,000MW by 2020.

The Ethiopian Minister for Water and Energy noted that “this project represents a significant advance in our Ethiopian energy initiative and is now part of our comprehensive Energy Plan. Given Ethiopia’s large hydro-electric generation capacity and now wind and geothermal power generation coming on-line, large scale solar fits nicely into our energy portfolio and will provide significant power generation capacity much faster then the other renewable technologies.”

The project is expected to create over 2,000 jobs and bring millions into the Ethiopian economy.

According to a report by Law360, the three solar power stations would not only supply Ethiopia energy, but will be added to an ambitious electricity highway due to be constructed between Ethiopia and Kenya, through which the Ethiopian government plans to sell surplus energy to the latter.