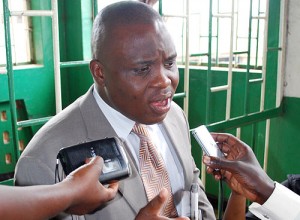 The ousted Mayor of Kampala Erias Lukwago has been reinstated to office after a High Court Judge ruled to overturn a decision by the city’s councilors to depose him earlier in the week.

The Mayor was deposed following an investigation into his actions by a special tribunal convened by the government. The tribunal reportedly found the Mayor guilty of incompetence and abuse of office, recommending that he is removed from office.

On Monday the Kampala Capital City Authority councilors voted 29 to 3 to have the Mayor deposed.

Several notable members of the opposition Forum for Democratic Change accuse the government of masterminding the plot to remove the Mayor from office after the ruling National Resistance Movement (NRM) lost the city elections to the opposition in 2011.

Pundits say the decision by the High Court Judge will test the power of the judiciary against the whims of a government that has been described as “repressive” and “dictatorial”.

According to the government’s spokesperson Ofwondo Opondo, the city’s councilors will protest the courts decision. Meanwhile, he issued a directive that the Mayor is not to be allowed to access his office pending a consultation with the nation’s attorney general for his take on the ruling.

Supporters of the FDC took to the streets and clashed with police following the announcement of the Mayor’s removal from office earlier. Several of the party’s supporters have expressed joy at the latest development. Speaking to the press today, Mayor Lukwago is reported to have noted that “justice has prevailed.”

Kampala has seen several bloody protests in the past few years as the opposition attempts to wrestle power from the government. Critics say the government’s latest moves may be part of its strategy to inhibit the opposition’s support ahead of the country’s general elections in 2016.