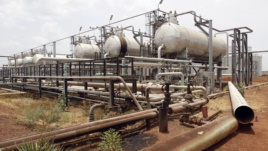 South Sudan is set to begin the construction of its first crude oil refinery before the year runs out, according to a press release published by the government yesterday.

The Bentiu oil refinery, which is expected to produce about 5,000 barrels of refined oil on a daily basis, is being funded by the government of South Sudan through the Nile Petroleum Corporation and Russia’s Safinat Group.

At a meeting with South Sudan’s Foreign Affairs Minister, Hon. Dr Barnaba Marial Benjamin, the Russian Ambassador to Kenya Sergey Shishkin noted that his government will continue to support South Sudan through “practical cooperation” to bring development to the young nation. He revealed that plans are underway to establish more joint initiatives between both governments in agriculture and other sectors.

The announcement of the construction of this refinery is a historic step in South Sudan’s journey to freeing itself of economic ties with Sudan, which have been a source of conflict between the two nations.

Currently, South Sudan depends on pipelines which run through Sudan to the Red Sea for the export of its crude oil. But disputes with the Sudanese government over tariffs for using the pipeline has seen the flow of oil shut for several months this year, leading the South Sudanese government to lose a substantial amount of its national income.

Several experts and international agencies have suggested that the government of South Sudan explores alternative ways of transferring its crude oil to the Port Sudan facility without using the pipelines that run through its antagonistic neighbor’s territory.

To solve this problem the government of the land-locked South Sudan has revealed plans to construct two pipelines that will connect the country to Djibouti’s Doraleh Port and Kenya’s Lamu Port.

South Sudan officially split from Sudan in 2011, taking a substantial amount of the former’s oil reserves. Revenue from oil trade makes up over 90% of the relatively young South Sudanese economy currently. But experts say the government must invest properly to diversify the country’s economy before its oil reserves begins to dwindle.