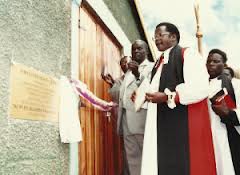 They called him ” The man who swapped the gun for the Bible”. They named him ” a crusader for justice”. He was one of the four most out spoken clergy members during the high noon of Kanu aristocracy.

He hailed from the Kalenjin nation, but had the “audacity” to direct some of the most vitriolic attacks on President Daniel arap Moi’s administration and his powerful Kalenjin inner circle. Muge, the former Bishop of Eldoret Diocese of the Anglican Church of Kenya (then Church of Province of Kenya), was outspoken in his criticism of the Kanu establishment and the government that when he met his death 22 years ago, Moi’s Kanu machine had to work hard to extricate itself from accusations of complicity.

He swapped the gun for the Holy Book in 1973 to serve humankind better and get solitude of life, seek redemption and “learn the meaning of things around him” in a peaceful and non-violent way. But Anglican bishop Alexander Kipsang arap Muge would later find redemption a tall order and had to spend most of his time on the pulpit criticizing the church hierarchy for practicing tribalism.

About three days before the bishop’s death, Kenya’s Labor Minister Peter Okondo told Muge that he would not return home alive if he dared visit Western Kenya.

The daredevil bishop took on the challenge, but true to Okondo’s threat, he did not return home alive. As fate would have it, Bishop Muge was killed when on his way back. A milk truck crashed into his car along the Webuye-Eldoret road on his way back after a triumphant entry into Busia in total defiance of Okondo’s threats.

Muge’s death was a major setback to the pro-democracy activists then.He died in mysterious circumstances after he defied an order from a Kanu stalwart not to visit Busia town. It was the mark of Muge’s enduring courage and fearlessness that he made the journey in the first place because three days before his death, Peter Okondo, then Labour minister, had warned the Bishop that he would ”see fire and might not leave alive” if he visited Busia town.

There has been speculation that Okondo did not mean it when he issued the death threat to Muge who perished in a road accident along the Eldoret-Turbo road after a visit to Busia.

A former intelligence officer, James Lando Khwatenge, who worked with the Special Branch in Eldoret at the time, reportedly told the Truth, Justice and Reconciliation Commission (TJRC) that the clergyman was killed by police officers who were sent directly from Nairobi to “finish” the outspoken bishop and use the accident to cover up.

Khwatenge was widely quoted in the media saying the bishop’s death on August 14, 1990, was the final job on what police called Operation Shika Msumari.

He said Kanu loyalists who wanted to assassinate Muge merely seized threats issued by the former Labour minister against the bishop and used him as a scapegoat.

TJRC listened to the former intelligence officer while conducting hearings on unresolved political murders since independence. No evidence was, however, presented to show that his death was anything but an accident.

The driver of the truck was charged with causing his death through reckless driving and sentenced to seven years in prison, but he died after serving only five years.

The attorney general ordered an inquest in response to the public outcry over his death and widespread suggestions of foul play, but nothing came out of the inquiry.

The clergyman was famous for fighting corruption, land grabbing, political assassinations, bureaucracy and other social ills and did not confine the fight for what he believed in Kenya’s borders.

Bishop Muge is also remembered over his open stand against homosexuality made on May 17, 1990 during a visit to the USA. He based his condemnation on classical understanding of the scriptures.