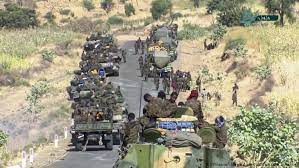 The Ethiopian National Defense troops Thursday began a second round of retreat from Raya Kobo district where they had stationed for nearly three months.

The retreating troops were met by strong resistance from the residents in Woldiya town and they were denied from further withdrawing.

It is not clear why the troops were retreating while forces of the Tigray People’s Liberation Front (TPLF) said they will launch a massive attack against Ethiopian forces starting from Friday Feb 18.

TPLF leader Debretsion Gebremichael Thursday announced the Tigrayan army is intact and well prepared to launch a massive offensive against the Wolkait area which is currently administered by the Amhara regional government.

Meanwhile, Ethioian Human Rights Commision (EHRC) has called for the release of detainees siezed under state of emergeny.

Ethiopian lawmakers lifted the six-month emergency rule ahead of its expiration, with a majority of vote during their meeting on Tuesday.

The following day, EHRC Chief Commissioner Daniel Bekele said that several detainees have been released, calling the move “a step in the right direction”.

“But we remain concerned about unlawful detentions after the lifting of the State of Emergency and the unfair use of remand procedure for an extended detention,” he said in a statement the Commission issued Thursday.

The commissioner issued the statement in response to reports of continuing detentions and remands just a few hours before the 48 hours legal limit after the lifting of the state of emergency.

“If government authorities have any credible case against State of Emergency detainees, the cases should have already been brought to a court of law,” he said.