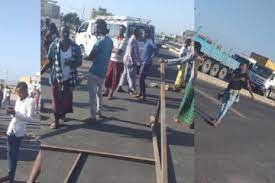 Angry protesters have blocked the main road linking Addis Ababa to the Amhara region at the Gohatsion town after the rebel Oromo Liberation Front (OLF) killed at least 30 hostages.

The rebel force took the hostages a week ago from the town and surrounding area known as Feliqliq and demanded a ransom of 200,000 birr per captive.

The residents accused the federal government of turning deaf ears to their requests to stop the targeted attacks against ethnic Amhara people and rescue the hostages.

Residents of the town also accused the Oromia Security Forces of collaborating with the rebel forces.

The protesters require the government to give attention to the targeted attacks against the Amhara people.

Truck drivers shuttling between the capital Addis Ababa to the Amhara region via Gohatsion in Oromia region say it has become a security risk to travel to and from the region.

There have been incidents of killings of truck drivers, beatings and kidnappings by gunmen operating in the region.

Ten truck drivers  reportedly had been killed in just one year between Oromia region and Abay Gorges in the Amhara region.

Over one hundred truck drivers had to quit their job due to the security problem in the Oromia region.