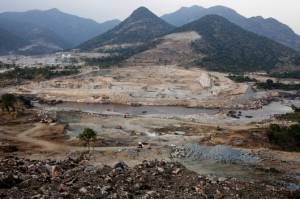 Ethiopia and Egypt have once again failed to settle their dispute over the Grand Ethiopian Renaissance Dam (GERD), after a short meeting between Prime Minister Hailemariam Desalegn and Egypt’s interim President Adly Mansour in Kuwait earlier in the week.

According to Al Jazeera, the tense meeting was called off after Ethiopia’s Premier declined the Egyptian’s leader’s request for his country to be involved in all discussions about the GERD.

This is the first meeting between the leaders of both nations after ex-President Morsi of Egypt sounded a threat to his Ethiopian counterpart that “all options are open” in dealing with the Nile disagreement in June this year.

The row between both nations is reported to have taken root in May when Ethiopia began diverting water from the Blue Nile as part of its construction of the GERD. Egyptian authorities immediately raised alarm, reminding Ethiopia of a colonial agreement between the tributary nations which entitles Egypt to the largest percentage of the Nile’s water.

But Ethiopian authorities have expressed interest in altering this agreement. Last year, several nations along the Nile—with the exclusion of Egypt—are reported to have signed a new deal changing the percentage of the Nile’s water appropriated to each nation.

Several officials and citizens in Egypt have relayed fears about the effects of the dam on their country’s water supply. Egypt has historically depended on the Nile for its water supply, currently the country is reported to get about 85% of its water from the Blue Nile.

Egyptian authorities are therefore requesting that the Ethiopian government reduces the size of the dam’s reservoir to scale down the effects its storage and spillage of water on the river.

The GERD, which will be Africa’s largest hydro-electrical dam once completed, is expected to have a reservoir of 63 billion cubic meters, which experts say will take about 5 to 6 years to be completely filled.

Ethiopian authorities have on numerous occasions reiterated their commitment to seeing the construction of the dam through to completion without any changes to its structure. Several Ethiopian officials, in refuting the stance of the Egyptian people, have highlighted on the report of an international panel of experts convened to assess the effects of the dam.

According to reports, the panel of experts noted that the dam is not expected to have any drastic effect on the water supply of Egypt and Sudan. However, the group called for studies to be made into the structure of the dam and set down a number of recommendations which are yet to be effected.

After a meeting between the water ministers of Ethiopia, Egypt and Sudan in Khartoum on the 4th of this month, it was revealed that the trio had agreed to put the recommendations of the panel of experts into effect. However, the Egyptian minister is reported to have raised some issues with the composition of the committee which will enact the recommendations. The ministers are expected to meet again on December 8th in Khartoum to continue discussions on the social and environmental effects of the GERD on tributary nations.

Despite calls for the construction to be halted, Ethiopia’s Minister for Water and Energy Alemayehu Tegenu recently revealed that his country does not plan to stop the construction of the $4.2 billion dam, which is expected to begin generating 700MW by 2014. He noted that the dam would be of benefit to all three nations–according to pundits, the prospect of getting cheap power supply from Ethiopia is one of the reasons the Sudanese government has not raised any objections to the construction of the GERD.

While in Ethiopia, a large section of the population are satisfied by the dam’s construction—with some vehemently defending their government against claims that the dam is being sponsored by Israel. In Egypt news of the dam’s construction adds to fears of destabilization. According to some Egyptians, not only did the Ethiopian government take advantage of the widespread protests in Egypt to begin the GERD’s construction, the damalso poses a risk of reducing water supply to Egypt’s historic Aswan dam.

Photo of the GERD site [by Salini Constructtori]