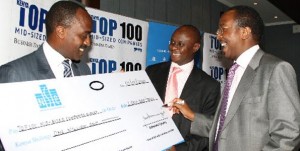 Kenyan authorities have revealed that plans are underway to develop a public record of all legally registered Small and Medium-sized Enterprises (SMEs) operating in the country.

The database is expected to ease the identification of companies and eliminate fraudulent ‘ghost’ companies who pose as legal establishments.

According to the Daily Nation, Chief Executive Officer of the recently created Micro and Small Enterprises Authority (MSEA), Patrick Mwangi, noted that the database is especially important “given the Presidential directive that at least 30 percent of public contracts be given to firms owned by youth and women, most of which [are] small and medium.”

He disclosed that the MSEA will appoint a registrar to commence the development of the public database soon.

The database, which will contain basic details such as the names, gender, age and country of origin of the owners of SMEs, forms part of the Kenyan government’s plan to support the development of SMEs as a way to strengthen the nation’s growing economy.

In the past few years, the Kenyan government has implemented various regulatory measures to support SMEs. Besides creating the Alternative Investment Markets (AIMS) and the Growth Enterprise Markets (GEMS) to assist SMEs in investing and earning capital from the Nairobi Stock Exchange (NSE). The Kenyan government has also tasked the MSEA with creating ideal conditions for the development of the country’s SMEs and supporting the creation of jobs for the country’s large young population.

Currently, SMEs are reported to employ 80% of the Kenyan population and contributed about 40% of the nation’s Gross Domestic Product (GDP) last year. Keeping with the government’s Vision 2030 industrialization goal, Kenyan officials say SMEs are expected to play a crucial role in the transformation of the country’s economy from being largely based on the export of raw material to the production of goods and services.