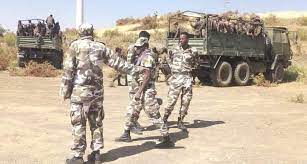 Forces of the Tigray People Liberation Front (TPLF) are nearing to control and block a vital road and trade route linking the landlocked capital of Addis Ababa to the sea port of Djibouti.

Backed by heavy weapons ranging from mortars and tanks, the Tigrayan forces have pushed to the east and captured about five districts in the Afar region.

Afar regional government Tuesday warned that the TPLF forces are nearing to Serdo town where one of the check points is found.

The Ethiopian national defense force has little or no involvement to defend the people of Afar as TPLF forces continue attacking civilians in the region.

The Afar fighters have engaged in hand-to-hand combat against the Tigrayan troops in the face of absence of heavy weapons and support from the federal government.

Over the weekend, Ethiopian activists took to social media to criticize lack of action on the part of the federal government in the Afar region of Ethiopia when the TPLF is undertaking a mechanized military attack in parts of the Afar region.

Citizen reports of fresh attacks against ethnic Amhara civilian’s communities were committed in the Guji zone of Oromia region of Ethiopia. Unspecified number of civilians might have been massacred.

The regional state in the Oromo region , where the periodic but ceaseless massacre takes place against Ethiopians, is claiming that it is investigating details of the level of damage in the Wollega.

As was the case in the past, there appears to be involvement of government officials in some form in the Oromo Liberation Front (OLF) – Shane massacre against civilians.