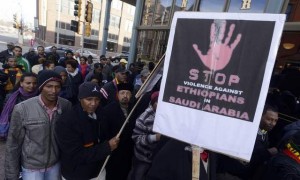 Ethiopians in several countries around the world are holding protests—principally around the embassies of Saudi Arabia—against reported abuses Ethiopian nationals are subjected to in the Gulf state as Saudi officials round up immigrants without legal permits.

Since Saudi authorities began rounding up illegal immigrants after a 7-month amnesty period expired on the 3rd, there have been frequent reports of immigrants being beaten, injured and even killed. Last week, three Ethiopian immigrants were reported to have been killed by Saudi officials during an attempt to take them into custody.

Reports such as this are reported to be have motivated the worldwide protests. Several protesters have requested that their governments pressurize Saudi officials to stop the alleged mistreatment of immigrants.

Following reports that Ethiopians were killed in Saudi Arabia, the Ethiopian government held a meeting with the Saudi ambassador in Ethiopia to throw light on the issue. Ethiopian officials have requested that the Saudi government opens an investigation into the killings, which the Ethiopian Foreign Affairs Minister Tedros Adhanom described as “deplorable”.

Already, the Ethiopian consulate has sent thousands of Ethiopians home. The national task force created to support the return of refugees revealed that in total about 20,000 undocumented Ethiopians are to be repatriated.

Hundreds of Ethiopians are reported to travel to Arabia and Asia yearly in search of better employment opportunities despite notable improvements in the Ethiopian economy in the past few years. In recognition of this problem, the Ethiopian government recently revealed that 55 million Birr has been allocated to the creation of jobs for the returnees.

In Ethiopia unemployment is reported to be highest among the young section of the population, prompting their increasingly desperate trips to foreign lands. Last month the Ethiopian government placed a ban on her citizens from traveling to Saudi to work as maids. Officials explained that the decision comes following disturbing reports of abuse of Ethiopian workers in the oil rich nation.

Speaking at the 3rd Africa-Arab Summit in Kuwait today, the Ethiopian Prime Minister Hailemariam Desalegn called for a unified African-Arab solution to the migration problem, describing it as a “joint responsibility”. According to reports, a special committee charged with developing solutions to the problem is set to be created.

Business is reported to have been generally slow in Riyadh since the crack down on illegal migrants began this month. But it is unlikely the Saudi economy will suffer any real effects from this move—which is reported to have been set in motion to subdue the migrant controlled black market and enable Saudi nationals develop the nation’s private sector.

In the midst of the chaos, loss of properties, injuries and death this mass repatriation is causing, Ethiopia stands to benefit. Several of the returnees have expressed determination to take advantage of the opportunities in their home country and build businesses—hopefully with the support of their government.