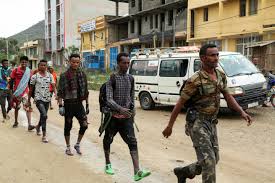 The Tigray People’s Liberation Front (TPLF) launched another attack and captured some areas in Ethiopia’s Afar and Amhara regional states.

The fresh attack came nearly a month after the federal forces suspended fighting upon the order of Prime Minister Abiy Ahmed in an attempt to end the 14-month conflict peacefully.

Residents are fleeing Raya areas to neighboring towns as the TPLF forces with alleged strength of 100,000 troops are pushing southward.

The Tigrayan forces also have been accused of kidnapping more than 500 civilians, largely young people. The whereabouts of the captives have been yet known.

According to the information obtained from TPLF troops who surrendered to the Ethiopian National Defense Forces, TPLF is mobilizing the Tigray people for all-out-war to establish an independent nation.

The Tigrayan forces reportedly built deep fortifications in Megalle of Afar and Timuga of  Amhara regions for a massive offensive.

TPLF leaders allegedly lost hope to resolve the conflict peacefully after Addis Ababa demanded them to disengage their troops and hand over  arms before any kind of negotiation.